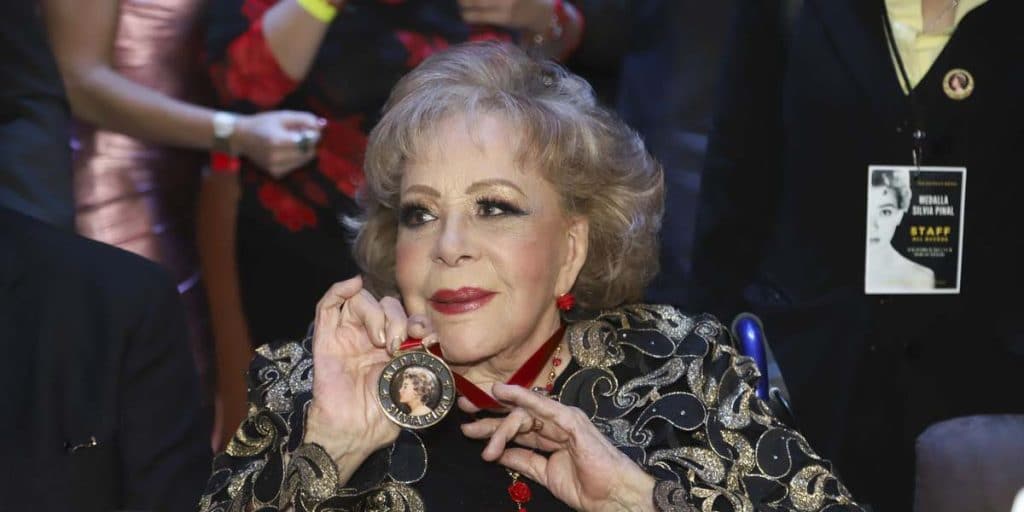 Who is Silvia Pinal?

Silvia Pinal Hidalgo was born in Guaymas, Sonora, Mexico, on 12 September 1931 – her zodiac sign is Virgo, and she holds Mexican nationality. She’s an actress and a film producer, who has appeared in more than 100 movies and TV series, while she’s perhaps still known best for her portrayal of the lead character Leticia ‘La Valkiria’ in the 1962 fantasy movie “The Exterminating Angel”. It was written and directed by Luis Bunuel, also starred Jacqueline Andere and Enrique Rambal, and follows a woman who has crashed a party for rich people; the movie won four of the six awards for which it was nominated.

There have been some rumors circulating the internet regarding Silvia’s health, but she is alive and well, and as of December 2021, is still highly active in the film industry.

Silvia was raised in Guaymas by her mother Maria Luisa Hidalgo, who was only 15 years old when she became pregnant; Silvia didn’t meet her biological father Moises Pasquel until she was 11 years old. She has three paternal half-siblings named Moises, Virginia and Eugenio. When Silvia was five years old, her mother married the journalist and politician Luis G. Pinal, who was known as ‘El Caballero Pinal’, and she had three step-siblings: Beatriz, Eugenia and Mercedes.

She started dreaming about becoming an actress at a very early age, however, her mother’s husband urged her to study something which would bring her money, claiming that pursuing acting would be a waste of her time. Silvia then started practicing typing, and was 14 years old when she found a job as a secretary.

She went on to attend Pestalozzi College, followed by her enrollment at Washington Institute (Mexico City).

Silvia’s career was launched in 1949 when she was 18 years old, with her portrayal of Juanita in the crime movie “El Pecado de Laura”; the same year saw her appear in three other movies: the drama “Bamba”, the comedy drama “Escuela Para Casadas” and the romantic war drama “La Mujer Que yo Perdi”.

She began playing lead characters in the ‘50s, and some of the most popular movies in which she appeared were the 1954 comedy “El Casto Susano”, the  drama “El Vendedor de Munecas” and the  romantic crime drama “Amor en Cuatro Tiempos” both in 1955.

In 1960, Silvia played the main character Maria ‘Mimi Pompon’ in the comedy “Goodbye Mimi Pompon” (original “Maribel y la Extrana Familia”), written and directed by Luis Marquina, and which also starred Fernando Fernan Gomez and Catalina Barcena. It follows Mimi who’s a famous French singer, and has decided to stop singing, and to marry the French merchant Heriberto Promenade, while both had previously married five times. Some of her other notable performances in the ‘60s were in the 1965 short comedy drama “Simon of the Desert”, the 1966 action war drama “La Soldadera” and the 1968 romantic comedy drama “Maria Isabel”.

What marked the ‘70s for Silvia was perhaps her portrayal of Mari Gaila, in the drama “Divinas Palabras”, written and directed by Juan Ibanez, and in which she starred alongside Mario Almada and Guillermo Orea.

It follows the life of the prostitute Mari Gaila, and the movie won an Ariel Award, Mexico for Best Cinematography (Mejor Fotografia).

Silvia appeared in only a couple of movies in the ‘80s, including the 1981 family drama “Dos y Dos, Cinco”, the comedy “Carlota: Amor es… Veneno” in the same year, and the 1982 drama “Pubis Angelical”.

She has since played and voiced characters in only a couple of movies, as she has been focused on winning roles in TV series. Some of Silvia’s most recent film roles have been in 2009, in the animated family comedy “El Agente 00-P2” (voice role) and the  family fantasy drama “Addicto de Salsa”, and the 2013 comedy drama “The Last Call”.

Silvia made her debut TV series appearance in 1968, when cast to star as Jimena in the historical action drama “Los Caudillos”, then in 1973, she appeared in three episodes of the romantic mystery drama “¿Quien?”

In 1979, she starred in the pilot episode of her own comedy show “La Revista Increible de Silvia Pinal”, but which wasn’t picked by any networks; she eventually gained recognition in 1984, when cast to play the main character Magda, in the popular drama “Eclipse”. It also starred Joaquin Cordero and Ofelia Guilmain, and follows a young girl who has fallen in love with an older man.

In 2000 and 2001, Silvia played Reverenda Lucia in the family comedy drama “Carita de Angel”, which starred Lisette Morelos, Miguel de Leon and Daniela Aedo, and follows the life of a young girl, whose father is a wealthy but depressed widower. The 2000s then saw Silvia play supporting characters in a couple of popular series, such as the family adventure drama “Adventures in Time”, the comedy “La Hora Pico”, and the family action drama “Fuego en la Sangre”.

In 2010, she starred as Isabel Rangel Vda. de Dorantes, in the romantic drama “Soy tu Duena”, created by Ines Rodena, and which also starred Lucero and Gabriela Spanic – it follows Valentina whose fiancé has just left her at the altar.

Three of Silvia’s most recent roles in TV series have been in the 2019 episode “Capitulo Final: Sueno de Amor” of the drama “The Heart Is Never Wrong” (original “El Corazon Nunca se Equivoca”), also a 2019 episode of the romantic family comedy “Una Familia de Diez”, and a 2020 episode of the comedy “+Noche”.

Silvia hosted 672 episodes of the crime thriller show “Mujer, Casos de la Vida Real” between 1988 and 2006; it has been airing since 1985, today numbers more than 1,500 episodes, covering true stories of rape, domestic violence and child abuse, as well as various other disturbing topics.

Silvia has been married four times. She married her first husband Rafael Banquells, the late Mexican actor, film producer and director, in 1947, and Silvia gave birth to their daughter Sylvia Pasquel in 1953, but the two divorced in the following year.

In 1961, she married her second husband Gustavo Miguel Alatriste, the late Mexican actor and film director, but they divorced in 1967 because Gustavo was unfaithful; their daughter Viridiana was born in 1963 – she died in a car accident in 1982.

In the same year when Silvia and Gustavo’s divorce was finalized, she married the famous Mexican rock ‘n’ roll singer Enrique Guzman; Silvia had second thoughts about this marriage, because she’s 11 years older than Enrique, but in 1968, she gave birth to their daughter Gabriela Alejandra Guman Pinal, who’s today a famous singer, and to their son Luis Enrique Guzman in 1970, who’s today a composer and musician. Silvia and Gustavo divorced in 1976.

From 1982 to 1995, she was married to the politician Tulio Hernandez Gomez; he was the governor of the State of Tlaxcala between 1981 and 1987, thus making Silvia the First Lady during those six years.

Besides her four marriages, Silvia has been in a couple of relationships with popular actors, including Arturo de Cordova and Omar Sharif, while she also dated the businessmen Conrad Nicholson Hilton, Jr., and Emilio Azcarraga Milmo.

As of December 2021, Silvia seems to be single, has been married four times, and has three children, after a fourth died in a car accident.

After she married her fourth husband Tulio, Silvia became interested in politics. She was a member of the Institutional Revolutionary Party, and in 1991 became their federal deputy. She then became a senator, and contributed to ecology, also to the passing of several laws which have helped tourism and theatres.

Silvia doesn’t have many hobbies today, however, she was physically highly active during her 20s, 30s and 40s. She had multiple training sessions every week, at both the gym and at her home, and she enjoyed playing various sports with her friends, including volleyball and tennis.

She posed nude for the Spanish magazine “Interviu” in 1978.

A statue of Silvia can be found in Mexico City, which was placed in 2002; there is also a wax figure of her at the Wax Museum of Mexico City.

She’s an author, having published her autobiography “Esta Soy Yo” in 2015.

As of December 2021, Silvia’s net worth has been estimated at over $16 million.