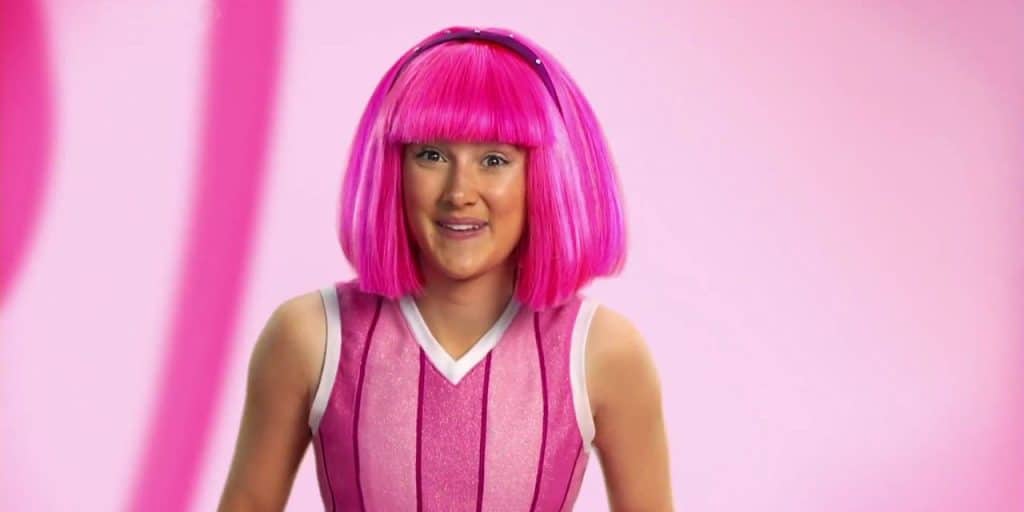 Where is Julianna Rose Mauriello from LazyTown today? Wiki

Who is Julianna Rose Mauriello?

Julianna Rose Mauriello is an American former actress, probably still best known to the world as Stephanie in the TV series “Lazy Town” (2004-2007), in addition to several other roles, before she left show business in 2013.

Where is Julianna Rose Mauriello Today?

As the energetic, pink-haired girl in the classic Nickelodeon Jr. show “LazyTown”, she starred in two seasons before she left the show, when she became too old to play the aforementioned character.

Julianna ultimately left show business to focus on her education, since when Julianna has been away from the public eye, though she runs an official Instagram page. She now works as an occupational therapist at The Quad Preparatory School in New York City.

Julianna Rose Mauriello was born on 26 May 1991 under the Gemini zodiac sign, in Irvington, New York State USA. Of Italian, German and Irish ancestry, she hasn’t shared the names of her parents, but it’s known that she has an older sister, Alex Mauriello, who is also an acclaimed actress.

After she left acting, Julianna enrolled at Columbia University, from which she eventually obtained a Masters’ degree in Occupational Therapy.

As a result, she made her debut as a child in the Party Scene of “The Nutcracker” in the production of State University of New York, Purchase.

Her interest increased, and in 1999 she appeared in her first on-screen role as Trixie Bottom in the television movie “Bonne Nuit”, but a summer spent at French Woods Performing Arts Festival made her fall in love with the stage, and after finding a theatrical agent in Nancy Carson, Julianna appeared on the stage as Li’l Titch in the 2002 revival of “Oklahoma!”.

The family moved to Manhattan where she enrolled at Professional Performing Arts School, and continued to make stage appearances, while also gaining recognition on-screen with appearances in commercials for such brands as Volvo, AstraZeneca, Wendy’s, and Disney Entertainment, among others.

Julianna secured the role of Stephanie in “Lazy Town” by chance. The original actress cast in the role declined, and after Nancy’s involvement, Julianna auditioned for the role when the show creator noticed the unique mix of talent and energy that would contribute to the popularity of the show, and easily spread its message, so handed the role to Julianna.

She moved to Iceland while working on the show, living in Reykjavik, and in the process learnt the Icelandic language. Julianna starred as Stephanie in 52 episodes of the BAFTA Film award-winning series, and the young star earned a Daytime Emmy Award-nomination in the category for Outstanding Performer in a Children’s Series.

She became remembered for her energetic performance in the town run by lazy people, and her success in changing their ways, becoming more energetic and start eating healthier. With a positive message to youth, and her out-of-the-ordinary look, Julianna became an idol for children from all over the world.

After leaving “LazyTown” when she outgrew her character, Julianna remained active as an actress until the mid- 2010s, securing a few more on-screen appearances.

She starred in the short drama film “A Fix” (2008) ,and in 2013 she appeared in the TV mini-series “The Doc Files”, after which she became focused on her education, and since then hasn’t returned to acting.

As of early 2022, Julianna Rose Maruillo’s net worth has been estimated to be around $2 million, earned largely through her successful career as an actress.

Since she left the spotlight, Julianna has rarely talked about her personal life, but according to her official Instagram account, she’s in a relationship with an unnamed man, and there’s no information about when they started dating, and what are her plans for the future.

This former young actress is remembered for the pink hair she had when starring in the “LazyTown”, but that of course is not her natural hair color. She has long dark brown hair and hazel eyes. She stands at a height of 5ft 4ins (1.64m), while her weight is approximately 120lbs (55kgs), with vital statistics of 32-26-32, and bra size 36B.

Julianna is a multi-talented woman and though she isn’t pursuing a career in the entertainment world anymore, she still occasionally sings and acts in front of her friends and family.

She is an avid animal lover, and has a dog named Ruby, which is often featured in her Instagram stories and posts. Moreover, Julianna loves to travel and has been to numerous countries all over the world, including Italy, Thailand, Greece, Sweden, Romania and Iceland, among many other destinations.