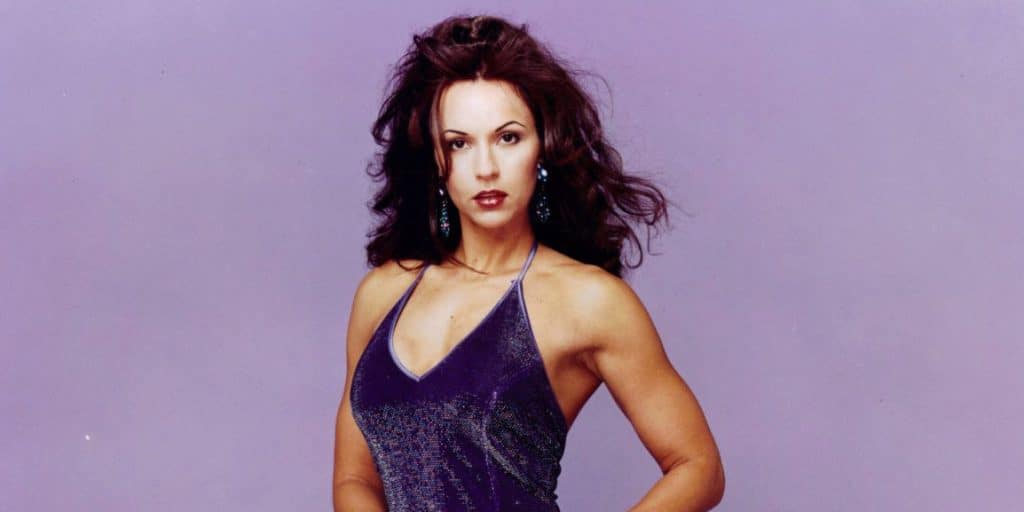 Where is Kimberly Page now? What is she doing today? Biography

Kimberly Lynne Bacon – aka Kimberly Page – was born in Chicago, Illinois USA, on 1 January 1970 – her zodiac sign is Capricorn, and she holds American nationality. She’s a former professional wrestler, but perhaps known better for being the leader of the dance team The Nitro Girls, and as the ex-wife of the former wrestler and now actor Diamond Dallas Page.

Kimberly grew up in Fort Myers, Florida, as she moved there with her family as a baby. In 1990, she graduated from Auburn University with a Bachelor’s degree in public relations and communications. In the following year, she completed a Master’s degree in advertising from Northwestern University.

Before she became known as a professional wrestler, Kimberly worked in the advertising industry, as a public relations co-ordinator and account executive.

Kimberly made her World Championship Wrestling (WCW) debut in 1994, as Diamond Dallas Page’s valet, under the alias The Diamond Girl. In the following year, Diamond Dallas Page was engaged in a feud with Dave Sullivan, which he ended up winning, but lost Kimberly in a match to Johnny B. Badd, who then freed her and made her his valet.

After Johnny’s departure from WCW, she became The Booty Babe for The Booty Man, who had recently left the Dungeon of Doom. After a year-long break from WCW, Kimberly made an appearance in March 1997’s “Uncensored” pay-per-view event, rejoining Diamond Dallas Page as part of his feud with “Macho Man” Randy Savage.

After the feud ended, she formed The Nitro Girls, who made their debut as a dance group on 14 July 1997 in Orlando, Florida.

They performed during “WCW Monday Nitro” breaks, and were given their own official website. Kimberly departed the group in November 1999, and later took part in a match against David Flair.

In the following year, she turned heel on Diamond Dallas Page and joined Eric Bischoff and Vince Russo’s New Blood Stable; as a part of the storyline, it was insinuated that Kimberly was romantically involved with Bischoff. She had also had brief feuds with Miss Elizabeth and Miss Hancock, before departing WCW in June 2000.

From 1994 to 1999, she appeared in several “Playboy” pictorials, and has also been featured on the cover of “Iron Man” magazine.

Roles in movies and TV series

While she was living in Atlanta, Georgia, Kimberly took acting jobs at the Alliance Theatre, before moving to Los Angeles, California to pursue a full-time career as an actress.

She made her film debut in 2001 in the comedy “Rat Race”, directed by Jerry Zucker, and which starred Rowan Atkinson, John Cleese and Whoopi Goldberg. She worked mostly as a stuntwoman, and had one scene as an actress, which was deleted from the original cut of the film, but was later included in the DVD version.

In 2004, Kimberly played her first starring film role in the sci-fi crime drama “The Scam Artist”, written and directed by Cliff Hensley. The film also starred her ex-husband, Dallas Page, and Michael Patrick Larson, while the plot was set in a dystopian version of the US, completely ruled by corporations. Many critics claimed that “The Scam Artist” was made with the intention of catapulting Kimberly’s acting career.

Also in 2004, Kimberly played Catwoman, in the fan-made short action movie “Grayson”, based on the characters from DC Comics. In the following year, she appeared alongside Steve Carell in the comedy movie “The 40-Year-Old Virgin”, in which she played one of the women Steve’s character met during a speed date. In the same year, she played the late girlfriend of Horatio Caine in an episode of the crime series “CSI: Miami”, and made an appearance in Larry David’s sitcom “Curb Your Enthusiasm”.

Also in 2005, she starred as Dragonfly, in the sci-fi action comedy film “Monarch of the Moon”. Kimberly then retired from acting.

The two met at his nightclub in Florida in 1989, and started dating soon thereafter. They married in 1991, and Page soon introduced Kimberly to pro wrestling.

In 1996 and 1997, a WCW storyline involving Erick Bischoff sparked rumors about him being in a ‘throuple’ with Kimberly and Diamond. Both sides adamantly disputed the claims, while Erick revealed that in real life, he and Kimberly were not even friends, let alone lovers.

The couple separated in 2004, before finalizing their divorce in the following year. They didn’t have children together, and apparently remained on amicable terms.

After her divorce, Kimberly almost entirely disappeared from the public eye, and instead chose to focus on her career in marketing and interior design.

She eventually remarried, and moved to Park City, Utah. ‘I kind of came full circle. I’d been living in L.A. since 2002, and I was just kind of over L.A. and needed a change to improve the quality of my life’, she revealed in an interview she gave for the website The War Eagle Reader.

Page Joseph Falkinburg – aka Diamond Dallas Page – was born in Point Pleasant, New Jersey USA, on 5 April 1956 – his zodiac sign is Aries, and he holds American nationality. He’s a former professional wrestler, an actor and a fitness instructor, probably known best for being a three-time WCW World Heavyweight Champion.

Page is of German, Irish and Dutch descent. His parents divorced when he was three years old, after which he was primarily raised by his father, Page Falkinburg Sr. He attended Point Pleasant Borough High School, from which he matriculated in 1974 – during his time there, he played basketball for the school’s team. He enrolled at Coastal Carolina University in South Carolina, but dropped out to focus on his career.

Before he became known as a professional wrestler, Page ran a night club in Fort Myers, Florida, which is where he met his future wife, Kimberly.

Around that time, he started working as a wrestling manager with Paul Diamond and Pat Tanaka in the American Wrestling Association, , known as Badd Company.

In 1991, Page came to WCW as the manager of Jimmy Garvin and Michael P. S. Hayes, known as The Fabulous Freebirds, and he also worked as a color commentator along with Eric Bischoff, before he started to wrestle himself under the name Diamond Dallas Page, and soon became one of the most popular WCW wrestlers.

In 2001, WCW was purchased by World Wrestling Foundation (WWF), and Page was one of the few WCW stars who accepted a contract with the new company. He suffered a serious neck injury in April 2002, which forced him to take a two-year-long break from wrestling. After his comeback, Page worked with independent circuits for seven years, before rejoining WWE (formerly WWF) in 2011.

For his contribution the world of pro wrestling, he was inducted into the WWE hall of fame in Orlando, Florida on 31 March 2017.