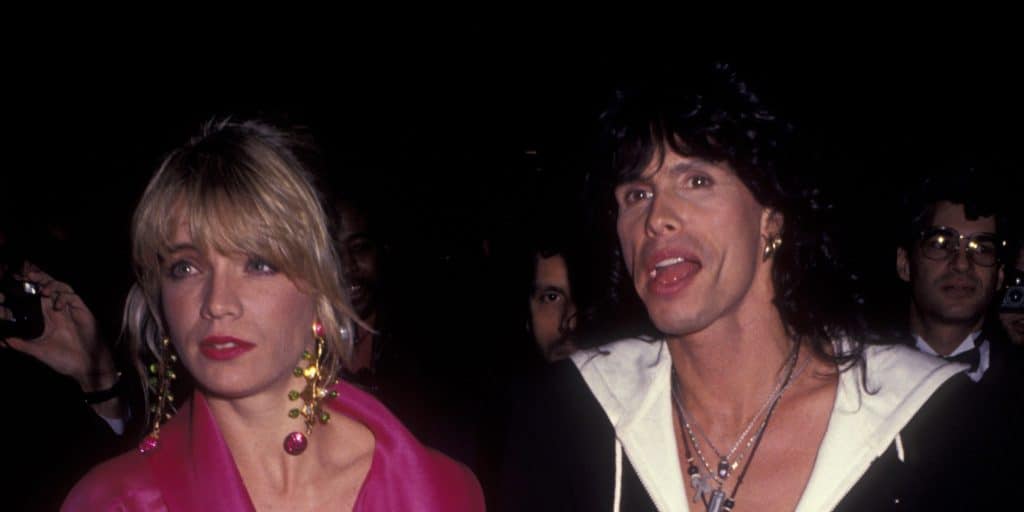 Where is Steven Tyler’s ex-wife Teresa Barrick today? Net Worth

Teresa grew up in Tulsa alongside her twin sister Lisa. They were apparently raised in a devout Christian family, but not a lot more is known about their parents and upbringing. Teresa matriculated from a local high school in 1978, and then moved to Boston, Massachusetts to study fashion design.

In Boston, Teresa became interested in the city’s music scene, regularly attending concerts in the area. In 1982, she visited Aerosmith’s recording studio, which is when she met the band’s frontman, Steven Tyler. The singer took a liking to Teresa, and they started dating in 1983.

A post shared by All Aerosmith related images (@aerocr)

About six years later, on 28 May 1988, the couple tied the knot in a private ceremony in Teresa’s hometown. In 1989, they welcomed their daughter Chelsea Anna Tallarico, and in 1991, Teresa gave birth to their son, Taj Monroe Tallarico.

Unfortunately, Teresa and Tyler’s marriage wasn’t without issues, and the two were faced with public accusations of infidelity on several occasions. Tyler’s celebrity status undoubtedly attracted many women at the time, however, there is no solid evidence which confirms that he had an affair while he was married to Teresa; it was later revealed that a lot of rumors concerning his unfaithfulness and alleged drug abuse relapse were originated by his former manager. Some media outlets also reported that Teresa might have been cheating on her then husband with one of the contractors in charge of renovating their house in Boston, but these rumors were never confirmed.

In 2005, Tyler attended the Grammy Awards ceremony accompanied by his daughters Liv and Mia, but his wife wasn’t present, which sparked rumors about their separation. Later that year, the couple announced that they were separating for personal reasons, and their divorce was finalized in January 2006.

During her marriage with Steven Tyler, Teresa also worked as Aerosmith’s main clothing designer. After her divorce from Steven, she reportedly stayed on good terms with him and the rest of the band, and continued making their stage outfits.

In recent years, Teresa has been keeping a low profile, and hasn’t made a lot of public appearances. She isn’t active on social media either, so her post-divorce life seems to be somewhat mysterious.

Given her disappearance from the public eye, rumors about Teresa’s death started circulating the Internet in 2020, with some people claiming that she has died in a car accident. However, these rumors have proven to be false, as Teresa is still alive and well.

She hasn’t remarried, and currently appears to be single.

Steven Victor Tallarico – aka Steven Tyler – was born in Manhattan, New York City USA, on 26 March 1948 – his zodiac sign is Aries, and he holds American nationality.

He’s a singer, songwriter, actor, musician and a former TV personality, known best for being the lead vocalist of the Boston-based rock band Aerosmith. He is primarily recognized for his wide vocal range, eccentric outfits and on-stage acrobatics. Due to his high pitched screams, he earned the nickname ‘The Demon of Screaming’.

Tyler grew up in Northeast Yonkers, New York City, alongside his younger brother. He comes from an ethnically diverse family, as his father was of German and Italian descent, while his mother has Ukrainian, English and African-American ancestry. Tyler studied at Roosevelt High School in Yonkers, but was expelled for marijuana possession during his junior year. He transferred to Quintano’s School for Young Professionals, from which he matriculated in 1964.

In 1969, Tyler met his future band-mates, Joe Perry and Tom Hamilton, at a local rock show. As they grew closer together, in 1970, they decided to form a band – Aerosmith. Although Tyler was a drummer in his previous bands, he wanted to be the band’s lead vocalist instead, while Joe and Tom would be a guitarist and bassist, respectively. They were soon joined by Joey Kramer (drummer) and Bard Whitfold (rhythm guitar), and moved to Boston to launch their careers.

As Aerosmith rose to popularity in the Boston rock scene, in 1972, they were signed to Columbia Records, releasing their eponymous album in the following year, and in 1974, their second album “Get Your Wings”.

By 1976 they were a rock sensation, headlining stadiums and rock music festivals all across the US, while Steven Tyler became a prominent public figure in his own right, appearing solo on the cover of “Rolling Stone” magazine. In 1977, Aerosmith released their fifth studio album, entitled “Draw the Line”, which became a huge commercial success and catapulted them to international stardom. They embarked on tours in Europe and Japan, and continued performing regularly until 1979.

As the decade wore on, the fast-paced life of rock stars took a toll on the band members. Steven Tyler and Joe Perry became notorious for their drug abuse, earning the nickname ‘the toxic twins’. After a heated argument between the two, Joe ended up leaving Aerosmith, to form his own band. In 1980, Tyler was injured in a serious motorcycle accident, which left him hospitalized for more than two months, followed by a long period of home recovery.

In 1981, Brad Whitford also left the band; Tyler’s drug abuse increased after these incidents, and he was reportedly seen roaming the streets of New York City, looking for dealers.

Three years later, Whitford and Perry attended an Aerosmith concert, meeting up with their former band-mates backstage, and agreeing reform the band. However, band members still struggled with drug abuse, particularly Tyler, who even collapsed on stage during a performance. In 1986, his band-mates staged an intervention on him, after which he entered a drug rehabilitation program.

Later in the same year, he and Perry were featured in Run-D.M.C’s cover of the Aerosmith song “Walk This Way”, combining elements of hip-hop and rock music, and its commercial success marked rap music becoming mainstream, while Aerosmith was introduced to a younger and more diverse audience.

In the following year, they released their ninth album, “Permanent Vacation”, which topped the charts both in US and internationally, and featured hit songs such as “Dude (Looks Like a Lady)”, “Angel” and “Rag Doll”. In 1989, their follow-up album “Pump” became even more successful, selling more than seven million copies, while the single “Janie’s Got a Gun”, won the first Grammy for the band.

Aerosmith became one of the most popular rock bands worldwide, and was often referenced in pop culture. In 1990, they appeared in a sketch on the popular comedy TV show “Saturday Night Live”, and in the following year, they became the first real-live band to be featured in “The Simpsons”. Tyler also made a cameo appearance in the popular 2000’s sitcom “Two and a Half Men”.

Their 1993 album “Get a Grip” became their biggest commercial success to date, with more than 15 million copies sold, and earned numerous awards and accolades for the band. In 1998, they released the song “I Don’t Want to Miss a Thing”, which became their first chart-topping hit, and the first song by a rock band to debut at #1 of Billboard’s Hot 100 chart.

Two years later, Aerosmith performed at the Super Bowl half-time show and were inducted into the Rock ‘n’ Roll Hall of Fame. Since then, they’ve released one more studio album, “Music from Another Dimension” (2012), and six compilations.

In 2015, Tyler launched a non-profit organization, Janie’s Fund, which focuses on providing protection and counseling for female victims of domestic abuse. In recent years, he’s been a vocal advocate against substance abuse.