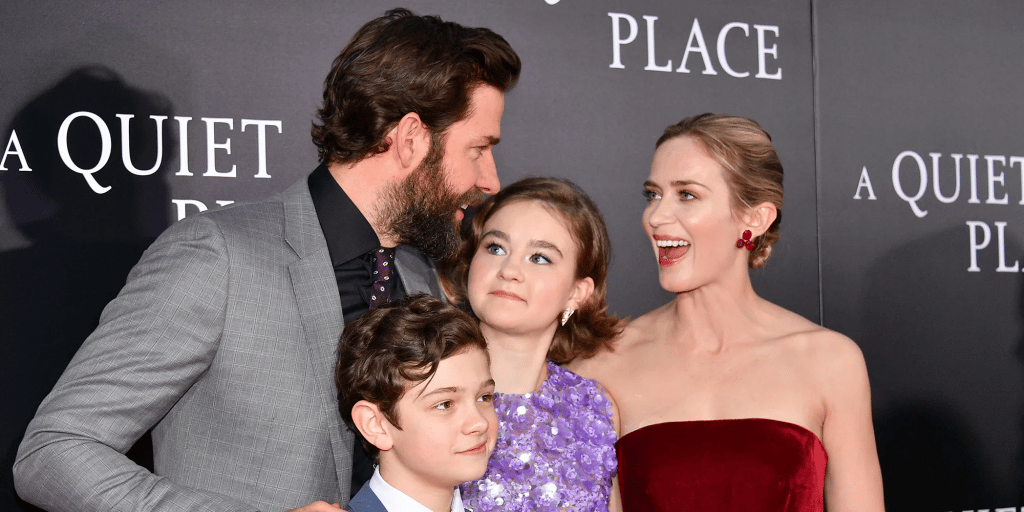 Who are Emily Blunt and John Krasinski’s children Hazel & Violet?

Who are Hazel and Violet Krasinski?

Hazel Grace and Violet Krasinski are celebrity children, best known as the daughters of “The Office” star John Krasinski and Golden Globe winner Emily Krasinski. Hazel was born under the Zodiac sign Aquarius on 16 February 2014 in California, USA, while her younger sister, Violet, was born under the Zodiac sign Gemini in June 2016 in New York City, USA. They both hold American nationality, and as of 2021, Hazel is seven years old, and Violet is five.

Hazel and Violet are currently being raised in Brooklyn Heights, New York City; according to their parent’s numerous interviews, the two have quite quirky characters. In 2019 Hazel was schooled online due to the global COVID-19 pandemic, and in August 2020, the whole family relocated briefly to London, where she began attending a school with proper uniforms, as Emily said in her interview with Jimmy Kimmel.

While in London, Violet developed a British accent, to her mother’s joy.

Considering that their parents are known as philanthropists and often participate in numerous causes and humanitarian events, in 2020 Jon proudly revealed that Violet and Hazel had designed a logo for Pepsi T-Shirts to help raise funds for chef Guy Fieri’s initiative with the Restaurant Employee Relief Fund (RERF).

Talking to the media outlet People, John revealed some details about Hazel saying: ‘She’s an amazing big sister, It’s a great age because she’s still young enough to not feel competitive with the baby, but still old enough to recognize how adorable the baby is. I think she’s in heaven.’ He also added that Hazel is very creative and talkative, living in her own world.

Interestingly, Hazel has not yet figured out that her parents are famous actors, John disclosed: ‘When she saw a poster for 13 Hours, she was like, ‘Daddy,’ and pointed to the poster.

She knew that was me on the picture, but I don’t think she knew why my picture was on a bus stop or a bench.’ Emily revealed that she hoped to keep it like that for as long as possible.

However, as she is growing up, it is harder to keep such a secret, Emily said:’ It’s a strange thing to navigate, you know. She (Hazel) came home the other day, and we were in the kitchen and she goes, ‘Are you famous?’

Reportedly, Hazel has shown interest in acting, and is said to be practicing her skills with a theater troupe.

What is Hazel’s and Violet’s net worth?

Given that Violet and Hazel are children, it is too early to talk about their net worth. On the other hand, their parent’s combined net worth is around $80 million, which they’ve earned through their acting careers.

Likewise, it’s too early to talk about their personal life.

A post shared by Emily and John Krunt (@kruntpics)

Hazel has blonde hair and blue eyes, while Violet has brown hair and brown eyes. According to John, they are both fans of drawing, and in their free time, they love watching animated movies.

How did their parents meet?

John and Emily met at a restaurant in 2008; talking to Seth Meyers, Emily said:’ I was sitting with a mutual friend, and my friend goes ‘Oh my god, that’s my friend John’. And that was it. He was sitting with our friend Justin Theroux, and he abandoned Justin and came over to us. He just stood there and made me laugh. I kind of knew right away.’

They soon went on their first date, which was at a very unusual place – a shooting range. John thought that it was unlikely that he would end up with Emily, so he wanted to blow it right away. On the contrary, the date went great, and in August 2009, he proposed to Emily in Los Angeles.

On 10 June 2010, they officially tied the knot in Lake Como in a private ceremony at George Clooney’s estate. When they welcomed Hazel in 2014, John proudly posted a photo of her to his Twitter account with captions: ’Pic of kids should only come directly from parents. So I’m thrilled to introduce you guys to Hazel!’ After Emily gave birth to Violet, John could not contain his excitement and wrote: ‘What better way to celebrate the 4th than to announce our 4th family member! Two weeks ago we met our beautiful daughter Violet.’

Making her TV debut in 2003, Emily starred in the British drama “Boudica”, followed by her performance in the drama film “My Summer Love”. In 2006 she was cast as Natasha in the British TV drama “Gideon’s Daughter”, winning the Golden Globe Award for Best Supporting Actress-Series, Miniseries, or Television Film.

During the same year, she played Emily in the commercially successful and critically acclaimed comedy-drama movie “Devils Wears Prada”, sharing the stage with Meryl Street and Anne Hathaway. Her performance in the film earned two nominations for BAFTA Award for Best Actress in a Supporting Role, and the Golden Globe Award for Best Supporting Actress- Motion Picture.

Emily continued building her profile, starring in several successful movies, “Wind Chill”(2007), “Sunshine Cleaning”(2008), and “The Young Victoria”(2009). In 2010, she starred in the re-adaptation of the 1941 eponymous movie “The Wolfman”, followed by her performance in the romantic comedy movie “The Five-year Engagement”.

In the following period, she was cast in several science fiction movies such as “Looper” (2012) and “Edge of Tomorrow”(2014).

She then starred in the commercially successful Disney Adaptation of “Into the Woods” musical by Stephen Sondheim, earning her second nomination for the Golden Globe Award for Best Actress.

Other notable roles include the popular movies “Sicario”, “The Huntsmen: Winter War”, and “The Girl on the Train”. In 2018, Emily portrayed the titular character in the musical fantasy movie “Marry Poppins Returns”, and Evelyn Abbott in the post-apocalyptic horror movie “A Quiet Place”, co-written and directed by her husband, John. She also reprised her role in the sequel “A Quite Place II”, which scooped positive reviews, and was a smash at the box office.

A Boston native, John graduated from Brown University, and spent his time perfecting the craft at the National Theater Institute, Actors Center, and Royal Shakespeare Company.

Before making his TV debut, he worked as an intern, writing scripts for “Late Night with Conan O’Brien”. John landed his breakthrough role in 2004, when he was cast as Jim Halpert in the mockumentary series “The Office”, the remake of the British series of the same name. The show was a huge success, garnering positive reviews, critical acclaim, and a devoted fan base, receiving 42 Primetime Emmy nominations throughout its nine-season run. The show, named by “Rolling Stone” as one of the 100 greatest shows of all time, concluded in 2013.

While starring in “The Office”, John also appeared in several movies, including “Smiley Face”, “License to Wed”, and “Ay We Go”. In 2009 he made his directorial debut with the comedy film “Brief Interview with Hideous Men”, based on David Foster Wallace’s short stories. In 2011 he shared the stage with Kate Hudson and Ginnifer Goodwin in the romantic comedy film “Something Borrowed”, followed by his roles in “Big Miracle” and “Nobody Walks”.

His next successful project was “Lip Sync Battle”, the musical reality competition TV series, for which he was an executive producer alongside Stephen Merchant. After garnering popularity, the show became a recurring segment of “Late Night Show with Jimmy Fallon”. In 2016 he was cast as Jack Silva, the main character in the war movie “13 Hours: The Secret Soldiers of Benghazi”, for which he had to go through extensive physical training to portray a former Navy Seal.

In 2018, he proved his triple-threat talent after co-writing, producing and starring in the movie “A Quiet Place”, with Bryan Wood and Scott Beck, which grossed $350 million against a $17 million budget. In addition to commercial success, it received several awards and nominations, including for the Academy Award for Best Sound Editing.

In 2020, John launched the web series “Some Good News”, which featured a variety of actors and celebrities, including Robert De Niro, Steve Carell and Emma Stone. During the same year, the sequel entitled “The Quite Place II” was released, which he wrote and directed. In an interview, he teased a potential third installment.