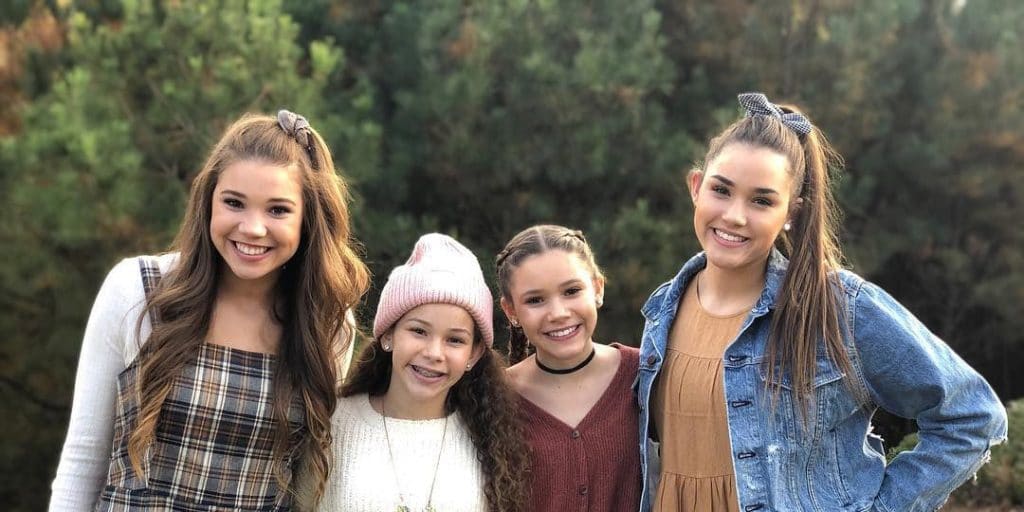 Who are Haschak Sisters? Age, Parents, Net Worth, Boyfriends

They are all YouTubers and social media stars, and are known for their YouTube channel, which they launched on 5 February 2008, is today subscribed to by close to 10 million people, and numbers over 3.6 billion views of all their videos combined. The girls are mostly focused on uploading videos which depict their everyday lives, while they also upload their original songs.

The Haschak sisters are being raised in California by their mother Kathy and their father John Haschak; nothing but this is known about their parents, as they prefer to stay away from media. When the girls were still very young, John and Kathy were running their channel, uploading their videos and responding to comments, basically establishing a family business.

All four girls have apparently attended the same high school, and all became interested in dancing at a very early age. It was the eldest sister Madison who started dancing first, and her sisters soon followed in her footsteps; the girls have developed various other interests, including acting, which seems to be Madison’s main passion. They are also all highly sporting, as they enjoy playing volleyball, tennis and soccer.

Madison matriculated in 2018 and Gracie in 2020, neither of whom have enrolled at college. Sierra should be matriculating in 2022, and Olivia in 2023.

The girls are mostly popular for their YouTube videos which feature them singing and dancing, and we’re going to mention three of these videos, which have helped them gain many subscribers.

Their #1 video, “Haschak Sisters – Like A Girl” has been watched close to 350 million times since 20 June 2018, and is their original music video created with the help of their parents.

Their second most popular video, “Haschak Sisters – Daddy Says No” has been watched over 250 million times since 31 March 2016, and is also the girls’ own original music video.

The sisters’ third most popular video “Haschak Sisters – Girls Rule The World” has been viewed nearly 200 million times since 11 May 2016, and is another of their original songs.

They’ve uploaded more than 500 pictures onto the network, the majority of these taken during their everyday life, and occasionally featuring their parents.

They launched their Twitter account in January 2015, and it’s today followed by nearly 50,000 people, while the girls have tweeted over 2,000 times; they mostly write about their everyday activities, as well as to announce the upload of their new YouTube videos.

They are followed by nearly 200,000 people on Facebook, although their most recent update was on 2 April 2021. The sisters have just recently launched their TikTok account, and it’s followed by close to 5,000 people, and numbers nearly 10,000 likes of all their five videos combined.

Madison’s presence on the internet

Madison Haschak is the most popular Haschak sister on Instagram, having amassed more than half a million followers, while she’s uploaded over 300 pictures onto the network, the majority of which feature her spending time with her friends.

Gracie Haschak is followed by close to 500,000 people on Instagram, and has uploaded nearly 50 pictures onto the network, the majority taken during her everyday life.

She launched her Twitter account in April 2015, and has tweeted close to 100 times, while she’s today followed by nearly 1,000 people; Gracie is followed by over 5,000 people on Facebook.

She’s a TikTok star, having amassed nearly a million followers on that network, while she’s gathered over six million likes of all her videos combined, most featuring her spending time with her sisters.

Sierra’s presence on the internet

Sierra is followed by nearly 300,000 people on Instagram, and has uploaded over 50 pictures onto the network; she prefers solo pictures, and rarely features her family and friends.

She launched her Twitter account in October 2015, and has since tweeted close to 50 times, so followed by less than 1,000 people. Sierra’s Facebook page is today followed by nearly 7,000 fans, and by nearly 30,000 on TikTok; Sierra hasn’t uploaded any videos onto the network, but videos which feature her have been uploaded by other people, and these have been watched nearly two million times.

Olivia’s the second most popular girl on Instagram in the Haschak family, as she’s today followed by more than 500,000 people, although uploading only 20 pictures onto the network, most featuring her spending time with her friends and family members.

She launched her Twitter account in May 2016, and has tweeted over 30 times, so followed by over 500 people. Olivia’s today followed by more than 6,500 fans on Facebook, and by more than 20,000 people on TikTok.

Their love lives and boyfriends

Since 2019, the eldest Haschak sister Madison has been in a relationship with Jonathan ‘Jon’ Fuller, who has also tried to become a YouTuber, but has only managed to attract over 200 subscribers onto his channel. There are rumors circulating the internet claiming that Madison and Jonathan have recently become engaged, but these haven’t been confirmed.

Gracie hasn’t spoken of any boys (or girls) whom she might have been with, and although there are rumors claiming that she’s today dating a non-celebrity American boy, these haven’t been confirmed.

Sierra and Olivia are also single today, and seem to be more interested in their careers on the internet, and their education.

As of November 2021, only Madison is in a relationship amongst the four Haschak sisters, with Jonathan ‘Jon’ Fuller.

The four Haschak sisters spend most of their spare time together, which is why they share some hobbies, and have several similar interests.

All four girls’ favorite season is summer, as they enjoy sun tanning at the beach together, and playing beach volleyball. They seem to dislike winter, because they don’t like being cold.

They are all huge lovers of dogs, and have recently welcomed a pet dog into the family, which can be seen featured in many of their Instagram pictures and YouTube videos.

The Haschak sisters are into travelling, and their parents have taken them to various US states, while they have also already been to a couple of European countries, including France and Italy.

Their favorite actors and actresses are Leonardo DiCaprio, Eddie Redmayne and Julia Roberts – their favorite movies include “Titanic”, “Catch Me If You Can” and “The Runaway Bride”.

As of November 2021, the sisters’ joint net worth has been estimated at over $15 million.