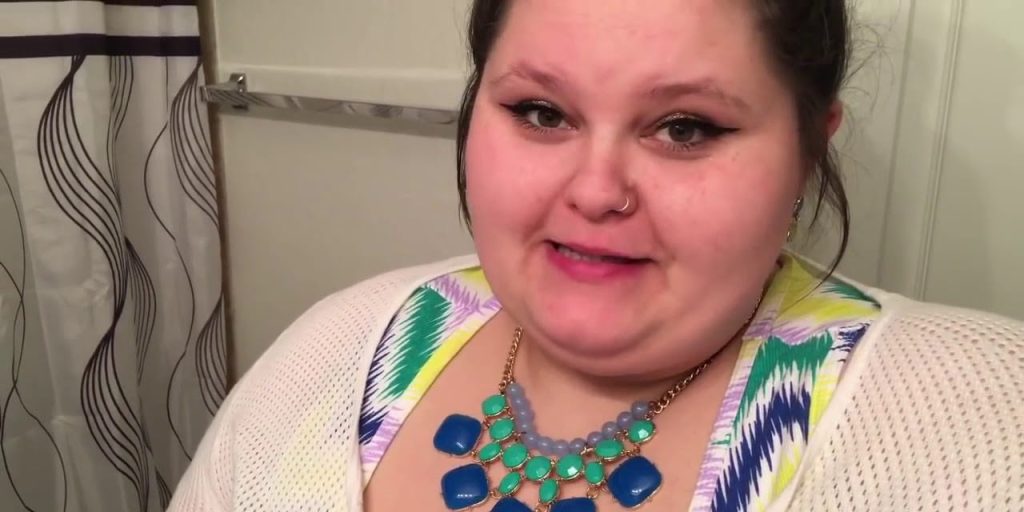 Amberlynn is a famous American plus-size model, social media star, and YouTuber, who is famous for her mukbang videos, and is noted for posting content relating to her chronic diet, fashion, lifestyle, and her daily personal endeavors.

Born Amberlynn Reid under the Capricorn zodiac sign on 27 December 1990, in Key West, Florida, USA, the famous vlogger is 31 years old as of 2021. She is the second-born child in her family of two brothers, Anthony ‘Tony’ Reid and James Reid; her mother is Kristine Reid (her maternal aunt is Tammie Lynn Smith) and is of Caucasian ethnicity; her father’s name isn’t available.

Although being born in Key West, Reid spent her childhood in California, and moved between many foster homes, as her biological parents were drug addicts, as she revealed in one of her YouTube videos; she had a rough childhood dealing with their fights and arguments, and was taken away from them at the age of eight.

She lived in several foster homes and shelters until she was 12 years old when her parents took her back to live with them in their trailer house. Unfortunately, they went back to using drugs after two years, which saw Amberlynn adopt drinking and smoking habits too. Reid’s elder brother soon began being physically abusive towards her, while she never got to meet her younger brother again, since he was taken to a different foster home.

Despite her rough childhood, Reid matriculated from high school and made it to college; she was enrolled in the Tucson-based Brown Mackie College, in which she studied Criminal Justice, however, she didn’t graduate.

Separation from Her Parents

Amberlynn’s parents separated when she was 15 years old; her mother moved in with her boyfriend. During that time, Reid was mentally sick and was even considering committing suicide. Luckily, she spoke to her friend who informed her teachers and she was soon taken to a mental hospital where she spent a week after being diagnosed with depression. Her doctors administered medications and she was taken back to her foster home, where she could meet with her elder brother and mother just once per week.

At the age of 17, one of her friends invited her to live with her family – her depression had worsened and she got into regular fights which prompted her friend’s brother to torture her and even threaten to kill her. She coped with her depression through stress eating, and by the time she was 18, she was 242lbs (110kg). She went back to live with her mother, but was soon afterwards diagnosed with panic disorder, and was unable to live with her any longer. Luckily, she was in a relationship with Kacey, whom she went on to live with.

Reid is a huge animal lover and has in the past kept several cats named Gracie (2014), Wasabi, Rarity, and Scarlet. She also kept a pet dog named Twinkie Starr.

Reid launched her career on YouTube in September 2011, creating her channel with a heading that read “We will see where this takes me…subscribe to see.” She uploaded her first video “Nervous+Awkward+Weight Loss Vlog,” which attracted a lot of views. She continued to upload other videos, which revolved around her lifestyle such as “Weigh-In + Dancing + More Awkwardness” and many more. She gradually became popular, and in less than a year she’d gained 10,000+ more followers.

Reid’s videos have been subjected to controversy and negative comments from people who criticize her eating habits, mostly for eating junk food in front of her camera, while others criticize her for her behavior towards her overweight dog.

Apart from YouTube, Amberlynn is active on Instagram with more than 60,000 followers – she goes by her username ‘raritycat.’ She uses her online fame to promote her projects and videos, and is also active on TikTok (amberlynnreid) and is fond of posting videos there. She’s active on Facebook too but has kept her profile private, and only accepts requests from people she knows, as she once revealed, to keep off online bullies who criticize her videos and eating habits.

Amberlynn is open regarding her love life and sexuality – she is openly lesbian.

She has dated many girls, and between 2008-2011 she was seeing Kasey ‘Cassie’ Cordiva who is an FtM transgender. The two met online before Cassie visited her in California for a week – subsequently, they decided to move in together and lived with Kasey’s mother in Tucson. Since Reid’s grandmother had declared that she was not welcome to go back to her California home, she had to live with her girlfriend for close to three years, then they parted ways.

Shortly afterwards she started dating Krystle Siviak in 2011, as soon as she’d opened her YouTube channel. The duo dated for a couple of years before they started fighting, which made them drift apart. They lived together with Krystle’s parents, but finally separated in 2015.

She once revealed that it was her fault that they parted ways, and insisted that they are still good friends up to now, and that they usually send birthday gifts and Christmas presents to each other.

She was later seen romantically linked with Destiny Cook, barely a year after breaking up from Krystle. The duo lived in Cook’s mother’s house before they rented their own apartment, but after two years they called it quits, and Cook went on to date Dana, leaving Reid the apartment they lived in.

Reid later started dating Rebecca ‘Becky’ Williams, whom she met in May 2017. Becky revealed that she fell in love with her after she saw her being bullied online; she was very eager to know if she was doing okay, which marked the beginning of their relationship.

The duo are still dating up to now, and are allegedly living a happy life together, currently in Lexington, Kentucky.

Reid has a pair of dark brown eyes and long brown hair. She is 5ft 4ins (1.63m) tall and weighs approximately 569lbs (258kgs). The vlogger revealed in one of her videos that there were days she would gain up to 3lbs in a day from overindulgence; however, she quit the habit her obesity has resulted in her experiencing health problems, such as binge eating disorder and gallstones.

Reid earns through her involvement in several social media scenes, and has amassed a net worth of approximately $300,000 as of late 2021, accumulated through video monetization, stream subscriptions, and sponsored posts.