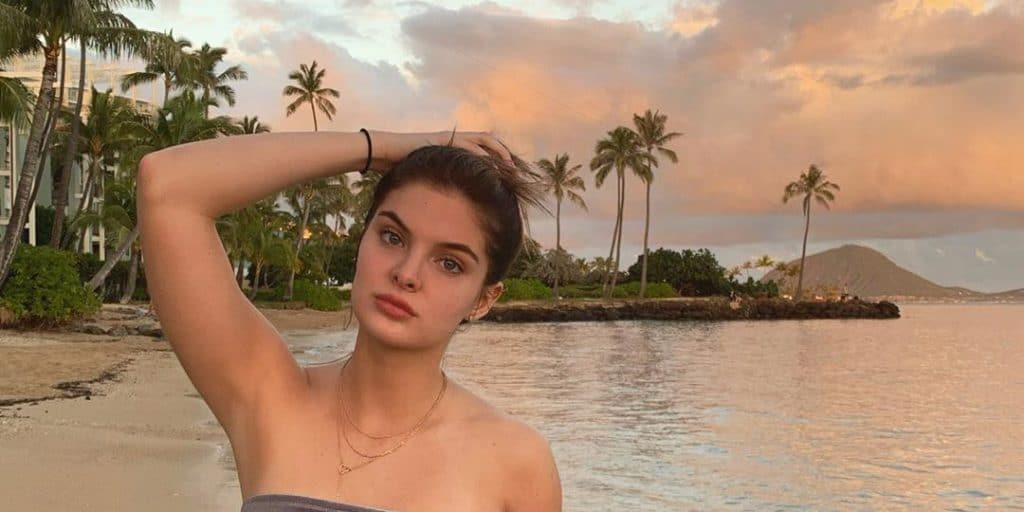 Who is Brighton Sharbino? Height, Age, Boyfriend, Net Worth, Bio

Who is Brighton Sharbino?

Brighton Rosie Sharbino is an actress and social media personality, who gained worldwide popularity portraying Lizzie Samuels in the series “The Walking Dead”. Her other notable appearances include the films “Cheap Thrills” and “Miracles from Heaven”. She was born under the Zodiac sign Leo on 19 August 2002, in Flower Mound, Texas, USA. As of 2021, she’s 19 years old and holds American nationality.

Brighton was born to Ron and Angela Sharbino, and raised in Flower Mound alongside her two siblings, Saxon and Sawyer Sharbino. Growing up, she became very interested in cheerleading and even attended several competitions. However, the cheerleading bug didn’t last long, and Brighton opted for acting instead.

She attended Bridlewood Elementary School, and also took acting classes. Reportedly, she was very into sports, and she played for the Greater Lewisville Area Soccer Association. At the age of nine, Brighton relocated to Los Angeles with her family, for better prospects and opportunities. Given that she launched her career at a young age, she had bounced between online school and homeschooling in order to pursue her career.

It appears that talent for acting and music runs in the family, as both of Brighton’s siblings are in the entertainment business. Saxon is a social media star and actress, perhaps best known for her roles in “Freakish”, “Touch”, and “Poltergeist”, while Sawyer is a musician and YouTuber, with over 1.3 million subscribers on his self-titled channel.

Brighton began her career starring in the children’s show “Barney & Friends”. When she was six, she had a minor role in an episode of the sports/drama series “Friday Night Lights”. In 2010, she landed several roles – Brighton guest-starred in an episode of the teen sitcom “Hannah Montana”, and starred in several short movies which include “Changing”, “Cool Dog”, and “The Death of Socrates”.

In 2011, she had a small part in the police/ procedural series “Prime Suspect”, followed by her roles in the short film “Promesas”, and the sitcom “The New Normal”. In 2013, Brighton landed the role of Luann in the black comedy/horror film “Cheap Thrills”, sharing the stage with David Koechner and Sara Paxton. While the movie, directed by E.L. Katz, scooped mainly positive reviews and praise for the cast, it didn’t perform well at the box office, grossing only $59,000 against a $100,000 budget.

After her minor appearance in the police/procedural series “NCSI”, she portrayed Socrates, granddaughter, in the short movie “Plato’s Symposium”.

During the same year, she landed her most notable role, as the recurring character Lizzie Samuels in the mega-popular post-apocalyptic horror series” The Walking Dead”, starring in the fourth season. The series, which got off to a rough start by attracting only average viewership during the first two seasons, became popular after its third season aired, quickly garnering an army of devoted fans. In addition to numerous awards and praise from the critics, the show is rated as one of the most successful shows, which attracted the most fans in the 18-48 years age group, although its popularity declined in later seasons.

Brighton also starred in the fifth season, appearing in a total of nine episodes. The show, which follows a huge ensemble of survivors making their way in life, fighting off zombies and other enemies, has run for 11 seasons and will conclude in 2022.

In 2014, she played Macie Hart in two episodes of the crime drama series “True Detective”, and made a one-episode appearance in the fantasy/adventure series “Once Upon Time”. The following year, she landed the role as Amy Brunner in the comedy/drama movie “Growing Up Smith “, alongside Jason Lee and Anjul Nigam.

In 2015, she portrayed Abbie Beam in the Christian drama movie “Miracles From Heaven”, sharing the stage with Jennifer Garner, Queen Latifah and Kylie Rogers.

Even though the movie received mixed to average reviews, with praise for Jennifer’s performance, it was a box office hit, grossing $74 million.

In 2017, she landed several roles in movies such as “Bitch”, “The Above”, and “Christmas in the Heartland”. After her one-episode performance in the procedural/crime series “Law& Order: SVU”, Brighton starred as Faith in the movie “Urban Country”. In 2018, she had a minor part in “Criminal Minds”, followed by her role as Megan in the drama movie “American Skin”.

The following year, she landed the title role with Dominic Monaghan, portraying Rese in the sci-fi drama movie “Radioflash”, and Allison Bets in the web series “Zoe Valentine”.

Her last roles were in 2020, sharing the stage with David White and William Baldwin in the action/vengeance movie “Beckman”. She also produced and starred in the sports/drama series “The Players”, with Micah Tarver and Dallas Liu.

While she is very secretive about her personal matters, in 2018 she dated the social media personality and YouTuber Ben Azalert, however, it didn’t last long as they broke-up during the same year. In 2020, she started a romantic relationship with a boy named Micah Yamauchi, and posted several photos with him to her Instagram account. He works as a freelance photographer, and has a YouTube channel.

Brighton is very popular on Instagram, on which she has 1.1 million followers, her Twitter  account over 165,000 followers, while her TikTok account has nearly 500,000 followers with 5.3 million likes. In addition to her prolific acting career, in 2014 she launched her self-titled YouTube channel, mostly to share her experience starring on TV and in movies.

In 2018 she hopped on the popular trend, and began filming pranks, video blogs and challenges with her brother and sister. Her content now is predominantly videos of her dances, lip-syncs, and sketches from her TikTok account. At the moment, her channel has nearly130,000 followers with nearly five million views. Given that both of her siblings have popular YouTube channels, she often appears in their video blogs too.

Brighton is 5ft 5ins tall (165cm) and weighs around 115lbs (53kgs) with vital statistics 30-24-34. Even though she has rocked different colors over the years, her natural hair is blonde, further adorned with green eyes.

She has a very fit and curvy physique, which likely indicates that she works out and follows some diet. Brighton tends to post photos of healthy meals to her Instagram account.

In her free time, she likes to swim, sunbathe and spend time in nature. Brighton is a huge fashion enthusiast, and likes to experiment with various styles.

She is a dog lover, and has a pet dog.