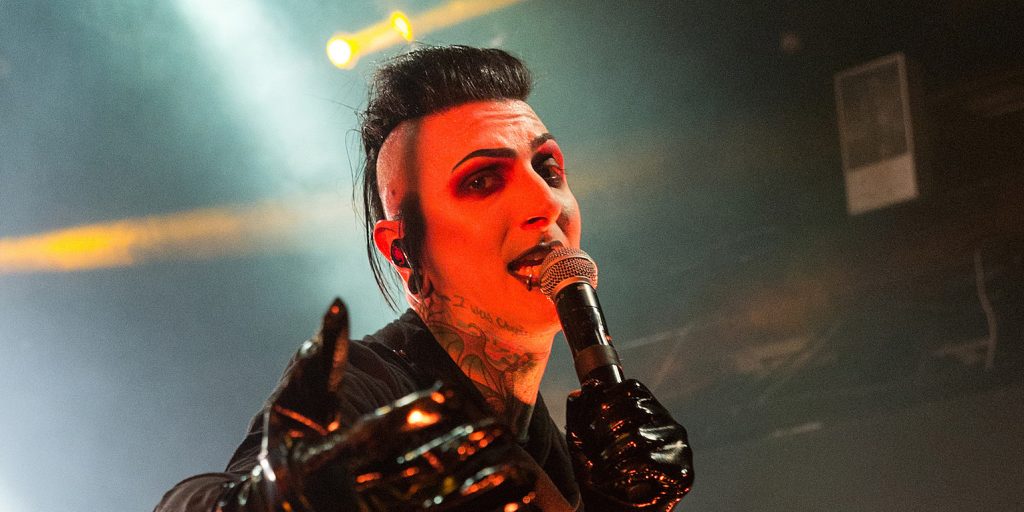 Chris Motionless is a famous American heavy metal musician, who is the rhythm guitarist and lead singer of the band Motionless in White (MIW).

Christopher Thomas Cerulli – aka Chris Motionless – was born under the Libra zodiac sign on 17 October 1986, in Scranton, Pennsylvania, and is 35 years old as of 2022. He has a younger sister and a brother who currently runs a family business with their father. Chris’ childhood wasn’t pleasant because his parents divorced when he was very young. His grandfather attempted to teach him how to play the guitar when he was eight years old. but he wasn’t interested at the time; instead preferring to play sports and video games.

He gradually developed a knack for music and playing the guitar, after his grandfather passed on when he was 10 years old.

Chris was actively involved in music when he was in high school, and he eventually co-founded a band. He worked at a tattoo shop after he completed high school, learning to be a piercer.

Chris is keen on taking care of his body, and likes going for massages from time to time, saying that he’s a ‘real housewife of Orange County.’

Chris has expressed keen interest in country music, and wants to write and sing a country song at some point – he enjoys listening to Elvis Presley and Johnny Cash’s songs.

He is a vegetarian, and has admitted that he was inspired to become one by his desire to accompany and show support to his father, who needed to take healthier food after suffering a heart attack as a result of high cholesterol level.

He’s revealed that he’s annoyed by people who wear metal and goth fashion without living the lifestyle. He said during an interview – ‘It can be annoying to see the Kardashians wearing Slayer and Iron Maiden shirts, then all these other models that have no affiliation with goth or metal…’

Chris was still in high school when he partnered with drummer Angelo Parente, together with bassist Frank Polumbo and guitarist Mike Costanz, to create the band Crabgrass, which later changed its name to Motionless In White in 2005. The metalcore band released their debut self-titled, recorded and distributed demo in the same year, and performed in local nightclubs for a while. Later, the other three members left the band but Chris remained, and they were replaced by two new members – keyboardist Josh Balz and guitarist Thomas Bell. While playing at a local nightclub, the band was noticed by Zach Neil, the CEO of Masquerade Recording, who loved their performance, and signed MIW to his label. Thereafter, they released their first major project in 2007, the EP “The Whorror.”

Fearless Records and Rise to Stardom

In 2008, Motionless in White released their first full-length album, “When Love Met Destruction”, with its first single “Ghost in the Mirror.” MIW afterward signed to Fearless Records, and subsequently came up with their first studio album, “Creatures” in 2010. The album’s lead single, “Abigail” was a major success and so were the second and third singles “Immaculate Misconception” and “Creatures.” In late 2012, MIW came up with their second album, “Infamous,” which climbed to position five on the ‘Top US Hard Rock Albums’ music chart. Following its success, the band released their third studio album, “Reincarnate” in April 2014, which has many hit songs such as “Break the Cycle” and “Puppets 3.” Then came their fourth album “Graveyard Shift” in 2017; they released their latest, “Disguise” in 2019.

Over the years, MIW has made a few line-up adjustments, and its new members include rhythm guitarist Ricky ‘Horror’ Olson, bassist Devin ‘Ghost’ Sola, drummer Vinny Mauro, and lead guitarist Ryan Sitkowski – Chris remains the oldest member of the band.

Chris Cerulli is active on several social media platforms; he has almost 390,000 Twitter followers and close to 550,000 followers on Instagram. In addition, he has around 560,000 Facebook fans.

Chris has a daughter named Riley, whom he welcomed with his then girlfriend, Carlie, in 2006. He loves vacationing together with his daughter and his mother, and has posted a dozen of their vacation photos together on Instagram.

Motionless began dating Sabrina Malfoy in 2013 but they parted ways before the year ended. He then met and started dating Gaiapatra, a well-known make-up artist and model who has a wide following on Instagram. Chris has partnered with her on various projects such as the “Alternative Press for Warped Tour” cover. The couple loves traveling side by side and they posted their photos together vacationing in Stockholm, Berlin, and London in March 2017 and seemed to be having a lot of fun. Chris, who is tight-lipped when it comes to his private life, last uploaded a picture of himself with Gaiapatra in 2018, so it’s not clear whether they’re still together.

Chris openly expresses anti-marriage sentiments, and his disdain for marriage is well documented. In his interview for Rock Sound, which is posted on their official YouTube page, he was asked if he believes in the concept of marriage, and he replied that ‘I don’t intend to ever get married’, adding that he does not believe in the so-called serious relationships.

His body is covered with tattooed inscriptions and artwork of various kinds; his most meaningful tattoo is that of a cowboy hat and a guitar – as he’s revealed, the guitar represents the one that his grandfather wanted him to have, but he wasn’t interested – he regrets that he missed out on bonding with his grandfather through music before he died. Motionless is also unique for his gothic dressing sense.

Chris’ time with the band Motionless in White and his long-spanning musical career has earned him recognition and a good net worth. According to authoritative sources, his present net worth is estimated at $3 million.