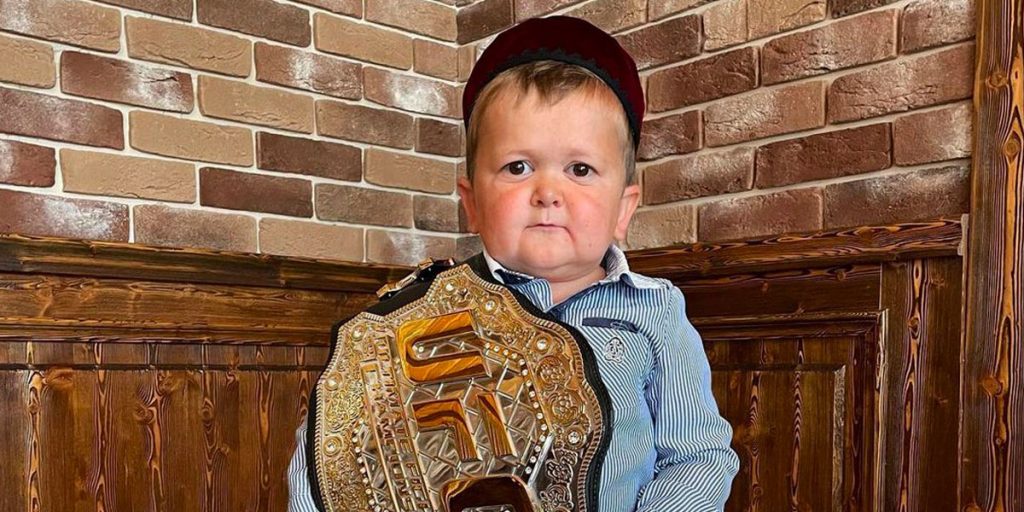 Hasbulla Magomedov became a rising social media star because of his funny prank posts and Mixed Martial Arts (MMA) related clips, including his re-enactment videos of the Ultimate Fighting Championship (UFC) Lightweight Division Champion Khabib Nurmagomedov. Although he is now an adult, the MMA community dubbed him “Mini Khabib” because of his childlike appearance and resemblance to Khabib.

There’s no exact information about his birthday, but according to many reports, Hasbulla was born in 2003. He appears like a five-year-old kid, despite the fact that he will turn 19 this year. His height is approximately 3ft 4ins (102 cm), and he weighs about 40lbs (18kgs) only.

There is also no confirmation on his condition, but numerous claims that Dwarfism or Growth hormone deficiency (GHD) is the main cause of his short stature and high-pitched or nasal voice. Many individuals who have been diagnosed with this disease can live and do things just as normal size people.

Hasbulla hails from the city of Makhachkala in the Republic of Dagestan, Russia. Muay Thai, wrestling, boxing, mixed martial arts, and other related sports are common in this region, and fighting is part of the Dagestan’s culture. As a result, it’s no surprise that Dagestan is a global powerhouse in combat sports and mixed martial arts, and most Russians, including Hasbulla, love watching UFC fights.

Many viewers found his videos amiable and shared these on social media sites like TikTok and YouTube, making him go viral. He is also known as General Vgorode, as it was also used as his display name on his social media accounts.

Most of his social media content is recreation videos of MMA’s notable moments, such as the weigh-in gesture and fights of legendary Khabib Nurmagomedov. He became an icon for the MMA community and the one who called him “Mini Khabib” because he looked like Khabib.

His stardom brought him to UFC 267 as a guest of honor held in Abu Dhabi, United Arab Emirates, on October 30, 2021. On that night, UFC Promotions President Dana White sat and spoke with him. Hasbulla also met Daniel Cormier, Khabib, and even his rumored rival Abdu Rozik at the same event.

Before 2021 ended, there were reports that Instagram had suspended his other account after he allegedly posted a death threat to a girl who reputedly posted a video of his sister online without permission. He released a statement denying the accusation, and he was only having a short break from the platform due to the increasing number of followers.

Are Khabib Nurmagomedov and Hasbulla related?

Khabib Nurmagomedov was the UFC Lightweight Champion from April 2018 until March 2021, becoming a legendary fighter in the sport’s history as the first Muslim to win a title, and rose to the top of the Men’s pound-for-pound rankings in the world.

He is not only famous in the MMA world but he is also known as a very religious person and a respected man for his good deeds. He is also a Dagestan native, but not related to Hasbulla, although quickly became close to him because of his kind and down-to-earth personality.

Hasbulla has been posting many videos and photos with Khabib Nurmagomedov on his Instagram, and they were seen in a restaurant taking pictures and playing board games. It seems that they share a great friendship and a special bond.

Hasbulla mentioned on the video uploaded onto YouTube channel of Asxab Tamaev (Chechen blogger and MMA fighter), that he wanted Cejudo to be his next opponent after Abdu.

Henry Cejudo (former UFC Flyweight and Bantamweight Champion) responded through Instagram with a clip of him saying in Russian, ‘I’m gonna rip you apart.’ Habulla’s friend, Khabi, backed him up, and protected him by replying to Cejudo’s post, ‘Be careful Champ, all Dagestan with Hasbulla.’

How does Islam Makhachev knows Hasbulla?

Another Russian UFC Champion and Dagestani is Islam Makhachev, who is also close to Hasbulla; he grew up and trained with his friend Khabib for many years. After defeating Dan ‘The Hangman’ Hooker in UFC 267 in Abu Dhabi, he was called the heir to Khabib as the UFC Lightweight Champion. Islam stated that he had known Hasbulla for over ten years because they lived in the same neighborhood.

Hasbulla went to Abu Dhabi to support his friend, and celebrated his victory with him.

Who is Abdu Rozik?

Abdu Rozik is a Tajikistan national and social media sensation, because of his talent in singing and rapping. Netizens discovered him and applauded his skills on his YouTube channel, Avlod media. He also has growth deficiency like Hasbulla, apparently as a result of not being treated for rickets when he was very young due to financial constraints. Abdu became more popular after his confrontation video with Hasbulla in UFC 267 received many views on the internet.

Before their video in Abu Dhabi, their brawl started on social media, when they teased each other to fight. They both accepted the challenge, and on 17 May 2021, Asxab Tamaev mediated the face-off of the two young men for their potential bout. Their video garnered almost nine million views online in just three days, and made internet users more excited to see these two go head-to-head.

Criticisms of Abdu and Hasbulla bout

Russians have divided opinions about it, and not everyone supports their battle. One of them is the head of the Dwarf Athletic Association, Uliana Podpalnaya, who expressed her dismay on Gazeta that the show is unethical, and will only entertain the audience with the money involved.

She stressed that the Paralympics are the venue for any sports competition for people with disabilities. Even Khabib shared that he didn’t want their match to take place, and so hurt each other. Instead, he advised them to become friends and use their popularity to fund-raise for charitable causes.

In the interview with Hasbulla at Eagle FC 43, he made clear that the duel will never happen, as Abdu is a singer and not a fighter. He added that the UFC offered to organize it, but they would need a budget to make this possible, and unlike the usual fights, not all MMA enthusiasts would be willing to pay. Hasbulla said that he’s not closing his door to fight someone skilled in combat sports.

Hasbulla plans to study the Quran and become an Islamic scholar because he doesn’t have any formal education. He’s willing to deactivate his social media accounts to focus on his studies. He also said that he would start a business, and open a garage if he has enough money from being a social media celebrity.