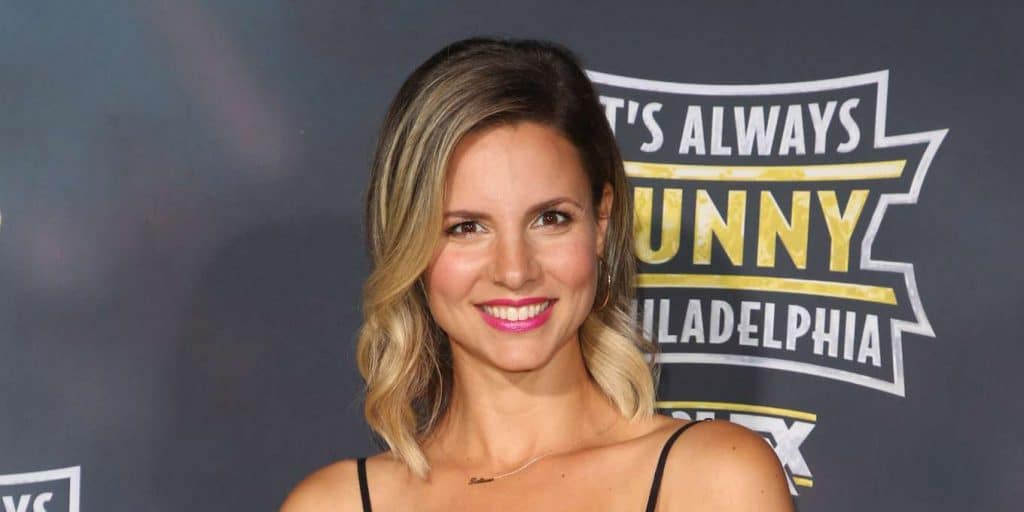 Who is Jill Latiano (Caylee on It’s Always Sunny in Philadelphia)?

Jill Latiano, born in Manhattan, New York City, USA, on 17th September, 1981, is a multi-talented actress, dancer and television personality who has also previously dabbled in modeling. With vital statistics of 35-25-35 and years of industry experience under her belt, the blonde beauty is 5ft 9in (1.75m) tall and weighs about 120lbs (55kgs).

Jill kickstarted her career at the age of eighteen, dancing for the New York Knicks basketball team. Starting in 2003, she also hosted the NYC Media series “Fashion in Focus” for two years. Featuring fashion heavyweights from Naomi Campbell to Gisele Bundchen, the series ran for a total of 21 episodes, and also featured young NYC designers on the rise.

In 2004, Jill was credited as ‘Party Girl #2’ in an episode of the hugely popular “Sex and The City”, thus laying the foundations for what would be a lengthy and fruitful acting career. Between roles, she also modeled for various small brands, which isn’t unheard of in the acting industry.

After a cameo on the set of “Sex and The City”, Jill had no trouble finding work, and appeared as minor character Geneva in two episodes of “Rescue Me”, a comedy drama centered around an unlucky-in-love firefighter.

The following year, Jill played Wendy in an episode of “Out of Practice”, the Emmy-nominated comedy series created by Joe Keenan and Christopher Lloyd.

2006 was a good year for Jill and saw her bedazzle viewers in episodes of “Heist” and “CSI: New York”. In 2007, the actress landed her first movie role as a singing pirate girl in “Epic Movie”, but negative reviews and low popularity saw the parody movie ‘win’ two awards – one for Worst Movie of the Year. and for Worst Film – it was also nominated for three Razzies.

From 2007 to 2012, Jill made brief appearances in several series, such as “Community” and “Chicago Code”, as well as appearing in small-budget movies including rated-R “Kalamity”.

Jill turned to producing in 2013, and worked alongside Jeremy Seifert in the making of “GMO OMG” – the gripping documentary saw Jeremy travel to Paris, Norway, Haiti, and other locations to ask pressing questions about genetically modified organisms and their effect on the planet, and the health of future generations. Thanks to its eye-catching tagline – “Is this the end of real food?” – and educational content, the 90-minute documentary was well-received by viewers and critics alike, despite the odd negative review.

A year later, Jill appeared in four episodes of “Legit” as Katie Knox, her longest-running acting role to date.

She also played Amy in a pilot episode of “Casual”, a romcom following the lives of a single brother and divorced sister trying to raise an adolescent, and navigate the world of online dates. This was the last time we saw Jill on TV; it’s likely that the actress left the unstable industry to focus on her family.

In 2018, Jill dabbled in producing once again with “The Devil We Know”, another environmental documentary. Joining forces with Jeremy Seifert for the second time, Jill travelled to West Virginia, where a group of angry citizens went up against a corporation and held them responsible for water pollution and dead cattle in the area.

Jill and her husband, Glenn Howerton, tied the knot in California in 2009; they were first pictured together the same year when they attended the FX fifth-season premiere of “It’s Always Sunny in Philadelphia” – it’s no surprise that the statuesque beauty also appeared in an episode of the hit series, as Glenn first joined the cast in 2005, and co-wrote and produced seasons of the show.

It’s said that the couple met in 2006, and became engaged in February 2008. Glenn and Jill have have two sons, Miles and Isley; the couple were lowkey with both pregnancies and even kept Isley’s existence a secret for three months until they broke the news of his birth at a red-carpet event.

With Miles born in September 2011 and Isley in August 2014, the foursome has apparently completed their family; they often post wholesome snaps on Instagram.

Jill raised some eyebrows after stating that “…on one hand I’m glad I don’t have a girl because there are so many things, but on the other hand there’s just as much with the boys and teaching them how to respect women and there are just so many things with a child”, but is also a staunch feminist who supports the likes of Alexandra Ocasio-Cortez and Kamala Harris.

From climate change to abortion rights, Jill has been very vocal about the causes she champions, and previously invited her followers to donate to the Natural Resources Defense Council, which aims to transform the key global economic systems to solve the climate change emergency.

She also frequently encourages her young fans to vote, and posts a number of resources on her Instagram feed to help them do so.

In May 2021, Jill also came under fire for an Instagram post stating that she has “no tolerance for antisemitism”. In the midst of the Israel-Palestine crisis, her post wasn’t well-received and led to her losing many followers, with one shrewd commentator accusing the actress of “siding with the oppressors”. The controversy led to the actress editing her caption, adding that she didn’t condone what was happening in the Middle East, and merely wanted to support her Jewish friends.

Reliable sources place Jill’s net worth at around $1 million. Despite having a short-lived and at times lackluster acting career, the thespian has amassed her seven-figure fortune thanks largely to working on informative environmental documentaries.

As for her husband Glenn, he has a net worth estimated at $20 million and a handsome annual =income of $4.5 million, which is likely to grow thanks to “It’s Always Sunny in Philadelphia” being renewed for four more seasons as of 2021.