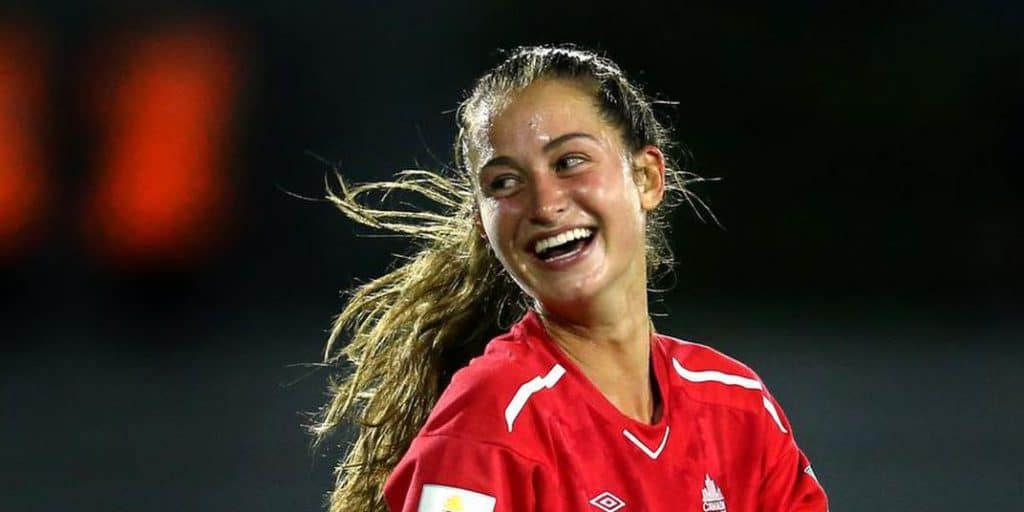 Who is Jordyn Huitema? Is she dating Alphonso Davies? Wiki

Jordyn Huitema was born in Chilliwack, British Colombia, Canada, on 8 May 2001 – her zodiac sign is Taurus, and she holds Canadian nationality. She’s a professional soccer player, who has earned international recognition playing for Paris Saint-Germain and the Canadian women’s national team.

Jordyn participated in many sports growing up, including soccer, swimming and hockey. She started playing soccer when she was only four years old, with the local Chilliwack Football Club. Her older brother, Brody is a former soccer player, and has played for Duke University, while her younger brother, Trent played ice hockey for the Humboldt Broncos.

Jordyn attended Rosedale Middle School in her hometown, and then studied at the Burnaby Central Secondary as a part of the Whitecaps Football Club Girls Elite program. After matriculating in 2018, she announced that she would forego college, eventually signing to play for Paris Saint-Germain.

Career as a soccer player

Jordyn spent her first season after matriculating with the TSS Football Club Rovers, of the Women’s Premier Soccer League. It didn’t take long for her to gain recognition, and in July 2018, she signed with the renowned French soccer team Paris Saint-Germain (PSG) Féminines. However, she didn’t sign a professional contract, so that she could maintain college eligibility.

She played her first match with the team during the pre-season, against Manchester City Women on 24 July 2018, and later that year was in the starting line-up for PSG’s semi-final match against the North Carolina Courage, in the International Champions Cup, but lost 2–1.

In January 2019, Jordyn enrolled at college and was able to sign a professional four-year contract with PSG in May the same year. She won her first title with the club in June this year, after scoring the first goal against Dijon in the Division 1 Féminine finals. This October, Jordyn made headlines for scoring a ‘hat trick’ against Ukrainian Women’s Football Club Kharkiv in the UEFA (Union of European Football Associations) Women’s Champions League group game.

As for her international career, Jordyn made her debut for the Canadian national under-15 team in August 2014, in a 5 – 0 victory against Puerto Pico at the CONCACAF (Confederation of North, Central America and Caribbean Association Football) Girls Under-15 Championship, and played 10 more matches for the under-15 squad.

After playing for both under-17 and under-20 teams, Jordyn debuted for the senior national team in March 2017, in the final of the Algarve Cup against Spain. In May 2019, she was named in the team for the  FIFA (International Federation of Association Football) Women’s World Cup. The team passed the group stage, by winning two matches, against New Zealand and Cameroon, but was eventually eliminated by Sweden, in the Round of 16.

One of her greatest achievements as a soccer player came in August 2021; as a member of the Canadian women’s soccer national team, Jordyn won the Olympic gold medal.

In recent years, Jordyn has grown a large following on social media. On Instagram, her account ‘@jordynhuitema’ numbers more than 1.5 million followers; she mainly posts photos from her matches and training sessions, but can also occasionally be seen posing alone or with her boyfriend, in a more casual setting.

Jordyn’s TikTok account is followed by more than 1.1 million people, while all of her videos have millions of views.

Furthermore, she and her boyfriend have a joint YouTube channel called Jaydin & Alphonso, which numbers more than 700,000 subscribers, with over 19 million total views. Some of their most popular videos include “Couple Q&A // GETTING TO KNOW US”, “COUPLE CHALLENGE FACTS OR SMACK!!” and “VLOG 1 // A DAY IN PARIS”.

Since 2017, Jordyn has been in a relationship with the Canadian soccer player Alphonso Davies, whom she met while they were training under the Whitecaps Academy. In a Q&A video they posted onto their YouTube channel, Alphonso revealed that he had been working up the courage to ask Jordyn out for a long time, before finally coming up to her one day and saying ‘Just wondering if you want to be Alphonso Davies’ girlfriend?’

The move evidently paid off, as the two have been together ever since. In 2018, they both moved to Europe, after they were signed for their respective teams. Alphonso always makes time to visit his girlfriend in Paris, and was once even fined €20,000 for being late for training, after spending his day off with Jordyn. It was recently reported that Alphonso was pledging for Jordyn to sign with the Bayern Munich’s women’s team, so they can spend more time together.

Who is Jordyn’s boyfriend Alphonso Davies?

Alphonso Davies was born in Ghana on 2 November 2000 – his zodiac sign is Scorpio, and he holds both Canadian and Liberian nationality. He’s a soccer player, perhaps known best for playing as a left-back for the renowned German soccer club Bayern Munich.

Alphonso was born in a refugee camp in Ghana to Liberian parents, the fourth of six siblings. Their parents originally lived in Monrovia, the Liberian capital, but fled during the Second Liberian Civil War. The family moved to Canada when Alphonso was five years old, settling in Edmonton.

Alphonso attended the St Nicholas Catholic Junior High, and during his time there played soccer for the school’s team. At the age of 14, he joined the Whitecaps Football Club residency, making his professional debut in April 2016.

In July 2018, he signed a multi-million-dollar deal with the German club Bayern Munich, debuting for the team in January 2019 in a match against Borussia Monchengladbach in the finale of the Telekom Cup championship, which Bayern won on penalties. In May the same year, Alphonso won his first Bundesliga title, as his team finished two points above rival Dortmund.

He made his UEFA Champions League debut in November 2019, in a 2 – 0 victory over Olympiacos. Shortly afterwards, Bayern’s coach, Niko Kovač moved Alphonso from the winger position to left-back. This decision proved to be the right one for Alphonso, as the gained the reputation of being one of the best left backs in the world.

In August 2020, he became the first Canadian international player to win the UEFA Champions League, as his team won against Paris Saint-Germain in the final.

Alphonso has also been playing for the Canadian national team, competing at CONCACAF Gold Cup, CONCACAF Nations League and World Cup qualifiers. He is known for his speed, and has recently made headlines by reaching a running speed of 37.1 km/h during a match against Panama.