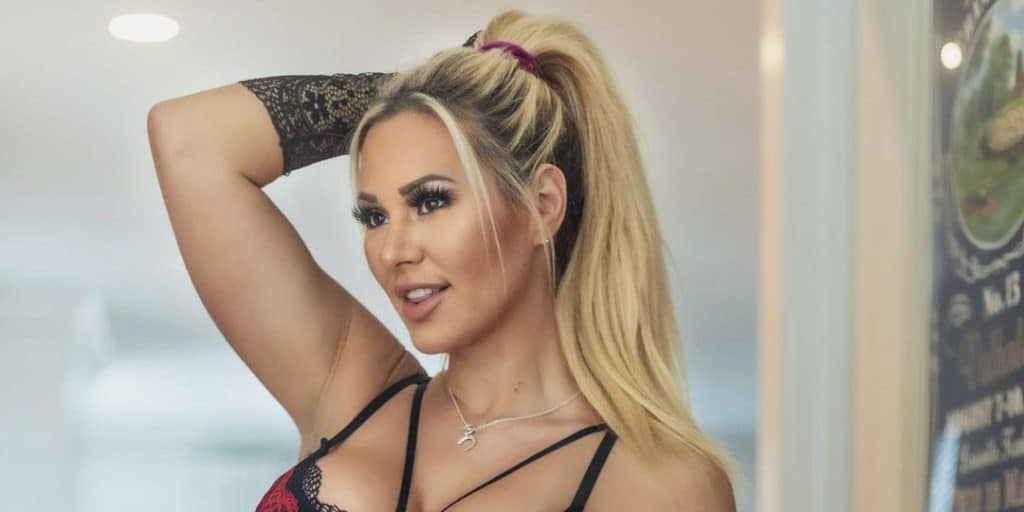 Who is Kindly Myers?

Kindly Myers, born on 20th September 1985, in Bowling Green, Kentucky, USA, is an exuberant glamour model with a large social media following. Known for appearing on various covers of men’s magazines such as Playboy and Maxim, Kindly is 5ft 8ins (1.72m) tall and weighs about 130lbs (58kgs), with vital statistics of 34-26-35.

At a young age, Kindly and her family moved to northern Tennessee and lived with her grandmother. She attended three schools: Red Boiling Springs School, Winter Haven High School, and Ft. Lee Virginia.

Before her rise to fame as a model, Kindly worked in the hospitality industry as a salesperson, a customer service representative at Walmart, and a sales representative for Abercrombie & Fitch. The bubbly blonde also dabbled in bartending, once claiming that NFL player Jimmy Garoppolo didn’t tip her!

Later on, she joined the military by enrolled in the Army National Guard. Following a grueling period of training in which she learned how to handle guns and other military equipment, Kindly served as an automated logistics specialist for four years.

After leaving the army, Kindly worked as a bartender and model in Nashville, while aiming for her big break. Her breakthrough came via Vine, the now-defunct social media platform which allowed its users to upload six-second videos.

Using Vine to make a name for herself, Kindly uploaded several short clips which became popular, and also collaborated with other ‘Vine famous’ users. Her fanbase grew exponentially, and helped her climb up the slippery rungs of the glamourous modelling world.

Kindly’s life changed for the better after she graced the covers of illustrious publications such as Vanquish Magazine, Lingerie Plus, and special editions of Bikini Plus Magazine. With the help of seasoned photographers such as Gary Miller, Kindly appeared in dozens of magazines, and caught readers’ eyes thanks to her charisma and physical assets.

Without a doubt, the highlight of Kindly’s career came in February 2017 when she was featured as a Playmate in Playboy Mexico. Described as an “American model who loves the beach and moments under the sun”, Playboy Mexico assured fans that they’d be left “breathless” by her stunning snaps.

In December of the same year, Kindly appeared in a Baywatch-themed shoot for Maxim, in which she channeled her inner Pamela Anderson. The ex-soldier went down well with Maxim’s readers, photographed by Kenny Roland, a prestigious name in the glamour modelling sector.

Kindly also capitalized on the OnlyFans boom during the beginning of the COVID-19 pandemic. With a monthly subscription costing fans $9.99, Kindly was one of many adult models who reaped the benefits of the content platform; in fact, one of her contemporaries, actress-turned-porn-star Maitland Ward, revealed that she was earning much more money during the coronavirus crisis.

Kindly has always been communicative with her fans, and isn’t known for holding back in her interviews. Previously, she opened up about her time in the army, saying: “Basic training taught me a lot about myself. I learned that I am much stronger than I ever thought I was, both mentally and physically. I also got to shoot many different types of guns and rocket launchers. It was fun and I met some great people”.

As for Kindly’s love life, it’s said that she began dating a man called Harrison Yonts way back in 2012, and that she confirmed their relationship via Twitter.

We don’t know much about Harrison, but we did manage to find their online wedding registry which was created in September 2021.

Kindly and Harrison have managed to keep their relationship lowkey for almost a decade, and rarely, if ever, mention each other on social media. On Twitter, Harrison likes to promote cryptocurrency, and retweets Kindly’s saucy snaps from time to time, clearly playing his part as her supportive partner.

Since 2019, Kindly has been collaborating with the Babes in Toyland Charity Toy Drive, which takes place annually.

Currently hosted by models and social media influencers, the toy drive has been going strong for over fourteen years and “gives patrons an opportunity to give back to the community alongside some of the most beautiful women in the world”.

The next toy drive will be held on 1 December 2021, with all proceeds going to The Midnight Mission, a Los Angeles-based charity which helps homeless people of all ages get back on their feet, as well as helping provide toys for homeless and near-homeless children. It’s estimated that the combined social media following of the hosts for this year’s event will be a staggering 100 million, helping shine a much-needed light on the noble cause.

In August 2021, Kindly appeared at the fifth annual “Support Our Troops” event held by the Babes in Toyland charity, and presented by Pascal Mouawad. Wowing in a semi-sheer dress and her signature blonde extensions, the ex-soldier showed off her incredible figure, enchanting onlookers and attendees alike.

Kindly’s been in the glamour modelling industry for quite some time, although she still isn’t one of the highest-paid models. However, it’s important to note that Kindly is a relevant social media figure, with almost three million followers on Instagram, which opens the door to other endorsements and opportunities. Recently, the model has collaborated with Arcwave and Curves N Combatboots amongst other online brands.

With over a thousand posts and a thousand subscribers on OnlyFans alone, Kindly could be earning up to $10,000 a month from the lucrative content-sharing platform. She makes sure to interact regularly with her fans, and even replies to their private messages, as well as offering them 5% and 15% off if they buy her subscription packs. The ex-bartender also keeps things interesting by uploading exclusive content which her Instagram and Snapchat followers don’t have access to.

Thanks to Kindly’s social media following, reliable sources place her net worth at an estimated $1 million, which she’s amassed in under a decade.