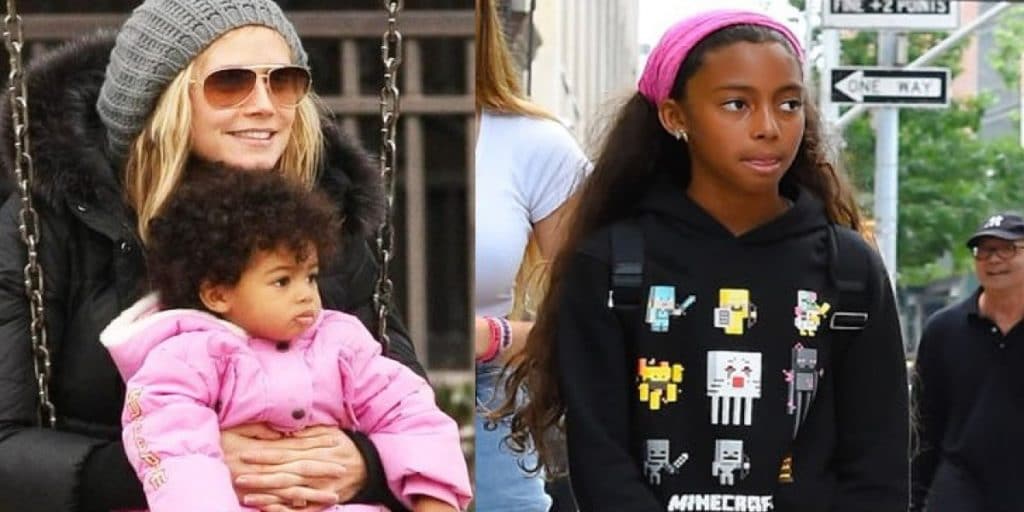 Lou Sulola Samuel was born in the USA on 9 October 2009 – her zodiac sign is Libra, and she holds American nationality. She’s only known to date for being the daughter of the German-American model and TV show host Heidi Klum, and the British singer-songwriter Seal.

Lou is being raised in the US alongside her two brothers, a sister and a half-sister, by their mother Heidi, who divorced Lou’s father on 6 April 2012 after more than seven years of marriage.

Before meeting Seal, Heidi was married to the stylist Ric Pipino from 1997 to 2002, and in 2003, she began dating the Italian businessman Flavio Briatore, who’s perhaps known best for being the managing director of the Formula One team Renault.

In May 2004, Heidi gave birth to their daughter Leni, who was later adopted by Seal. Following her divorce from Seal, Heidi dated Martin Kirsten, her bodyguard, and was then in a three-year relationship with Vito Schnabel, an art dealer. Since February 2019, she’s been married to the guitarist Tom Kaulitz.

Seal hasn’t spoken of any women whom he’d dated prior to meeting Heidi, nor since their divorce.

The two are keeping Lou away from the media’s attention, but there are rumors circulating the internet claiming that she’s become interested in singing, wanting to follow in her father’s footsteps, and has already begun taking lessons.

Age, height and her parents’ net worth

Who is Heidi Klum?

Heidi Klum was born in Bergisch Gladbach, then West Germany, on 1 June 1973 – her zodiac sign is Gemini, and she holds both German and American nationality.

She was the first Victoria’s Secret Angel from Germany, and gained recognition when she started hosting and serving as a judge on the American reality show “Project Runway”, which has been airing since 2004, and also stars Nina Garcia and Tim Gunn – it follows a group of fashion designers who are competing to become the best; the show has won eight awards, including two Primetime Emmys, while it’s been nominated for 95 other awards.

Heidi was raised in Bergisch Gladbach alongside her brother Michael, by their father Gunther Klum who was a cosmetics company executive, and their mother Erna who was a hairdresser. In 1992, Heidi was convinced by her friend to enter the national modelling contest Model 92, which she won out of 25,000 people.

She then signed a contract with the businessman Thomas Zeurner, worth $300,000, and moved to New York City.

She almost immediately featured on the cover page of the magazine “Vogue” in many countries, including Portugal, Germany and France, while a couple of the other magazines in which she was featured were “Elle”, “Glamour” and “Marie Claire”. Heidi became more famous after her picture appeared on the cover page of the prestigious magazine “Sports Illustrated Swimsuit Issue”, and in 2000 was invited to become a Victoria’s Secret Angel, leaving only in 2010.

Heidi is also an actress, and has made a guest appearance in various critically acclaimed series, including the comedy “How I Met Your Mother”, and the romantic comedy drama “Sex and the City”; she has also appeared in a couple of movies, such as the comedy “Blow Dry”, the drama “The Life and Death of Peter Sellers”, and the comedy drama “The Devil Wears Prada”.

She’s an artist too, and her work can be seen featured in many art magazines. Heidi’s also a bit of an author, as she published her autobiography “Heidi Klum’s Body of Knowledge” in 2004, co-authored by Alexandra Postman.

Heidi is a philanthropist, and has donated money to various charity organizations, mostly to those which aim to improve the quality of life for underprivileged children.

Henry Olusegun Adeola ‘Seal’ Samuel was born in Paddington, London, England, on 19 February 1963 – his zodiac sign is Aquarius, and he holds British nationality.

Seal was raised in Paddington by a foster family, because his parents were unable to take care of him; his biological mother, Adebisi Ogundeji is from Nigeria, while his father Francis Samuel is from Brazil. Seal became interested in music while attending a local high school, and was a member of the school band; he was also into acting, and appeared in several plays performed at the school. Upon matriculating in 1981, Seal enrolled at college, and graduated with a two-year diploma in architecture in 1983. He then worked various jobs, before focusing solely on singing.

Seal began singing as soon as he matriculated, and in 1987 joined the punk band Push, and spent the year touring in Japan. Seal then travelled to Thailand where he joined a blues band, then went on to travel around India on his own. He returned to England, and fortunately met the music producer Adamski, who invited him to sing on his single “Killer”, which topped various UK charts. Seal then signed a contract with ZTT Records, and his debut album “Seal” was released in 1991, while its lead single “Crazy” became a hit, peaking at #7 on the Billboard Hot 100 Chart in the US, and #2 on the UK Singles Chart.

Seal is a philanthropist, and has donated money to various charity organizations, but mostly those which aim to help those suffering from AIDS.