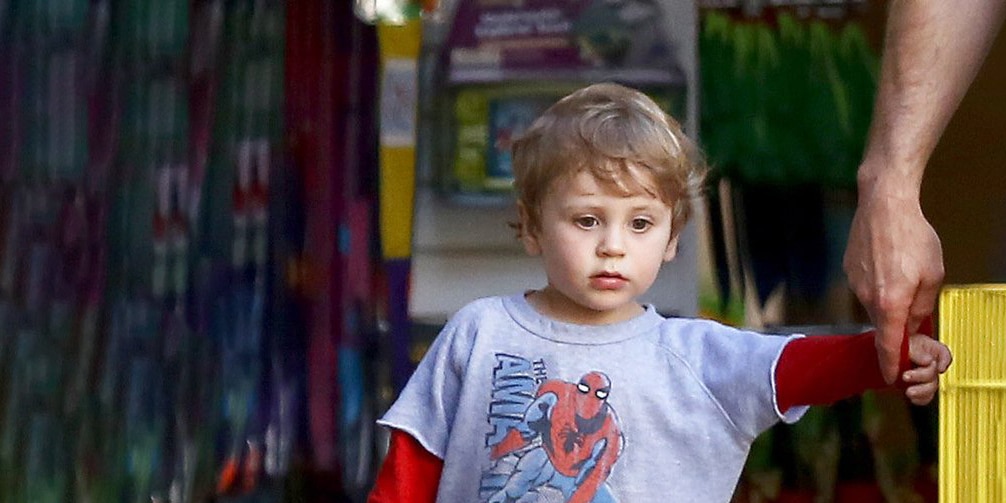 Exton Elias Downey was born in Los Angeles, California USA, on 7 February 2012 – his zodiac sign is Aquarius, and he holds American nationality. He’s probably known only for being the son of the famous American actor Robert Downey Jr., and his wife Susan Nicole Downey (nee Levin), who’s an American film producer.

Exton is being raised in Los Angeles alongside his sister Avri Roel, by their parents. He’s currently attending a local elementary school, and it’s said that he has already shown interest in acting, and has begun appearing in school plays.

Exton also has a half-brother, Indi Falconer Downey, from his father’s marriage with the American singer-songwriter and actress Deborah Falconer; the two were married from 29 May 1992 to 26 April 2004. Before that first marriage, Robert was in a seven years long relationship with the American actress and film producer Sarah Jessica Parker.

Both Robert’s relationship with Sarah and marriage with Deborah ended because of his drug abuse. His second wife knew about his former drug problems, but believed that he was indeed sober when they started dating; they seem to be leading a happy life together, as of August 2021.

Who is his father Robert Downey Jr.?

Robert John Downey Jr. was born in New York City, USA on 4 April 1965 – his zodiac sign is Aries, and he holds American nationality. He has appeared in close to 100 movies and TV series, initially gaining recognition back in 2008, with his portrayal of the main character Tony Stark, in the action science fiction adventure movie “Iron Man”, directed by Jon Favreau, and which also starred Gwyneth Paltrow and Terrence Howard.

It follows the billionaire engineer Tony who, while being held hostage in a cave in Afghanistan, creates a weaponized armor suit to free himself. The movie won 21 of the 96 awards for which it was nominated, including two Oscar nominations.

Robert was raised in Manhattan alongside his older sister Allyson, by their father Robert Downey Sr. who was a moviemaker and an actor, and their mother Elsie Ann (nee Ford) who was an actress. Robert’s father was a drug addict, and allowed Robert to try marijuana when he was six years old, after which the two occasionally used drugs together.

Robert was five when he made his acting debut, when his father cast him to appear in his comedy movie “Pounds”, and two years later, he appeared in the western “Greaser’s Palace”.

Robert then moved to England and practiced classical ballet, then in 1978 after his parents’ divorce, he moved back to California, and enrolled at Santa Monica High School; he soon dropped out to focus on acting.

The ‘80s mostly saw him appear in various plays, both on Broadway and off-Broadway, and in 199, he was cast to play Charlie Chaplin in the biographical comedy movie “Chaplin”, for which he had to learn to play the violin and tennis. A couple of Robert’s other notable performances in the ‘90s were in the 1994 romantic drama “Only You”, the 1994 crime drama “Natural Born Killers”, and the 1999 drama “Black and White”.

Between 1996 and 2001, Robert was arrested multiple times, mostly because he was in the possession of various drugs, including heroin and cocaine. In 1997, Robert spent half a year in prison, because he was on three years’ probation but missed a drug test he had to take. In 1999, he was sentenced to spend three years behind bars, but was released after having served a year.

It was the famous Australian-American actor Mel Gibson who helped Robert resurrect his career, as he paid his insurance bond to have Robert star in the 2003 musical crime comedy movie “The Singing Detective”. It was in the same year that he starred in the movie “Gothika” and met Susan, who then helped him to stop drinking and using drugs.

Since he portrayed Iron Man for the first time in 2008, Robert has appeared in many other Marvel movies, which have made him a huge star. He also starred in the 2009 period mystery action movie “Sherlock Holmes”, the 2014 legal drama movie “The Judge”, and the 2020 fantasy adventure film “Dolittle”.

Robert has stated that he hasn’t used drugs since July 2003, and that his wife Susan, family,  meditation and yoga, and Wing Chun kung fu have helped him the most. In December 2015, all his prior drug convictions were pardoned by Governor of California Jerry Brown.

Robert’s also a bit of a musician – he released his only album “The Futurist” back in 2004.

Susan Nicole Downey was born in Schaumburg, Illinois USA, on 6 November 1973 – her zodiac sign is Scorpio, and she holds American nationality. In the 2000s, Susan was the Silver Pictures’ executive vice president of production, as well as the co-president of Dark Castle Entertainment; as of August 2021, she’s running her and Robert’s own production house – Team Downey.

Following graduation, she joined Threshold Entertainment Group, and helped make the movies “Mortal Kombat” and “Mortal Kombat: Annihilation”. During her time at Dark Castle Entertainment in the 2000s, she helped develop and produce various movies, including the supernatural horror “Thirteen Ghosts”, and theaction thriller “Swordfish” both in 2001. In 2007, Susan produced the psychological thriller “The Brave One”, and she also produced the 2008 crime movie “RocknRolla”.

In 2014, she produced the family movie “The Judge”, which starred her husband.

Susan met Robert in 2003, when they both worked on the supernatural horror movie “Gothika”; Susan was the producer, while Robert starred in it. At that point, Robert was still in the process of divorcing his wife Deborah, and Susan rejected his date offer twice, believing that they would break up after the shooting was completed. They eventually dated until 5 November 2003 when Robert proposed, and on 27 August 2005, the two married in a large Jewish ceremony. Robert has stated many times that he credits Susan with helping him quit alcohol and drugs, and even the famous British film director and producer Guy Ritchie has stated that Robert would be a pain to work with if it weren’t for Susan by his side.