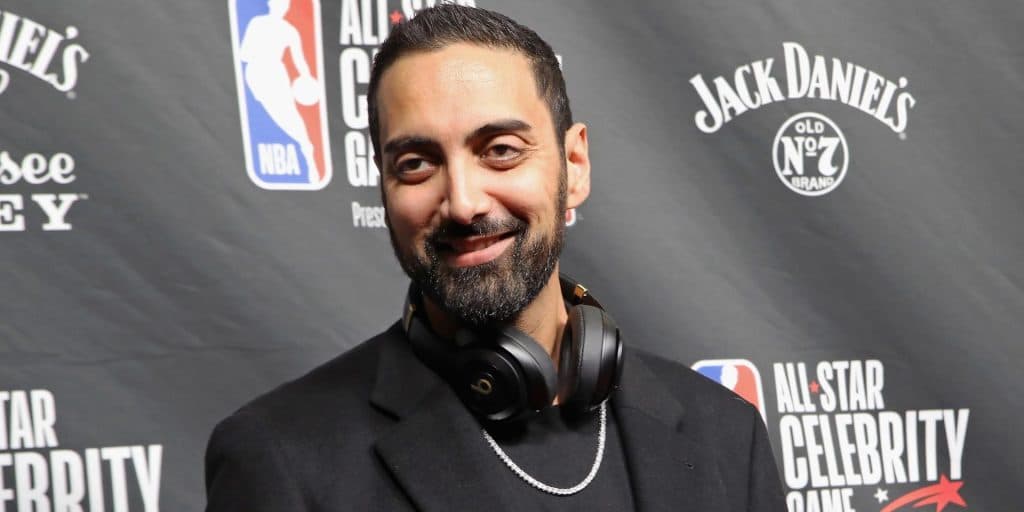 Ronnie 2K is an American sports celebrity, the brand ambassador of NBA 2K, and an internet personality. He’s been active in sports for a while, yet many don’t know much about how he started. Find out everything about him in the biography below.

Ronnie Singh -famously known as Ronnie 2K- was born on 14 November 1982, under the zodiac sign of Scorpio in the United States to a family of Indian descent. He’s of mixed ethnicity, and holds American nationality. There are sparse details about his family and early life.

Growing up, Ronnie was a sports enthusiast, and as he got older focused on basketball. He followed the games religiously, and plastered his bedroom walls with newspaper clippings of his favorite games and athletes. Ronnie Singh matriculated from RedWood High School.

As a teenager, young Ronnie knew he had a passion and wanted to work in the sports industry. However, he was confused on which college major to pick. He said, ‘I always wanted to work in sports, so I was just bouncing around. It was super frustrating for me, my folks, and my family because I kept changing majors.’

Ronnie’s career in the sports scene started when he got an opportunity to work for a women’s basketball team in San Diego. In his words, ‘I had to go one way or the other, so I decided to do the sports thing and hope for the best.’ He was given the position of Director of Media Relations, which involved organizing conferences, meet and greets, etc. He worked with the team for a year until his resignation in March 2006.

Ronnie then accepted a post as Director of Operations with a minor league baseball team based in San Diego – his first career move at the new unit was to sign Jose Canseco at the peak of his ‘Juiced’ era.

He also hired, trained, and managed all the needs of the staff, until March 2007.

While he excelled at his day job, Ronnie enjoyed playing 2K as well. At the time, he was on the leader boards for NFL and NBA 2K5.

An opportunity opened up for Ronnie to run the new forums instead of writing on message boards, so Ronnie leveraged social media and the internet to establish his credibility as a 2K expert.

Due to his consistency and contributions, Ronnie became popular in the 2K Community and soon became the NBA 2K Brand ambassador. He also serves as the Digital Marketing Director at 2K Sports. He is a middleman between the 2K Developers and the players, relaying information from developers to players and vice versa.

In the course of his career, Singh has been involved in some online feuds. After the NBA 2K22 ratings rolled out, Ronnie announced that Washington Wizards player Bradley Beal scored an 89% rating. His wife, Kamiah Adams-Beal, took to Twitter to question the ranking and call the game a joke. Ronnie, of course, clapped back, and the two are still at loggerheads.

Ronnie Singh said that the biggest mission statement of his job is to ‘tie the latest and greatest together, and make it about 2K. The NBA has done a good job of becoming a 365 league, which has made it necessary for us to be a 365-game offering.’

When advising people looking to make an impact in the sports industry, Ronnie said, if you want to do something, you’ll figure out a way to make money while doing it.

Singh started his YouTube channel ‘Ronnie’ in September 2011, using it to provide information on everything 2K to his subscribers. Some of his earliest videos were: “NBA 2K15 MyPark- Ronnie2K Teams Up With Paul George & LD2K At Rivet City!” (2014), “Ronnie 2Kicks | Off-White Jordan UNC” and “NBA 2K19: Celebrity Tournament” both in 2018.

In the first few years of Ronnie’s YouTube career, he didn’t upload videos consistently, but in recent times has started taking the platform more seriously.

Ronnie is very private with his personal life, so he doesn’t share many details about his relationships.

However, the sports agent proposed to his girlfriend at Disneyland on 15 September 2021 and shared the good news on Instagram with the caption: ‘about last night. Magical moment we will never forget.’

Ronnie Singh lives in Los Angeles, California, with his fiancee and their dog.

Ronnie is 6ft 9ins (1.95m) tall and weighs around 130lbs (61kgs). He has short black hair and dark brown eyes. He often wears athletic jerseys and shorts, an at other times, you’ll find Ronnie dressed in a hoodie and sweatpants.

In late 2021, Ronnie Singh has an estimated net worth of $1.5 million, earned from his years as a sports agent, internet personality, and from personal projects. Details of property owned by Ronnie 2K remain undisclosed.