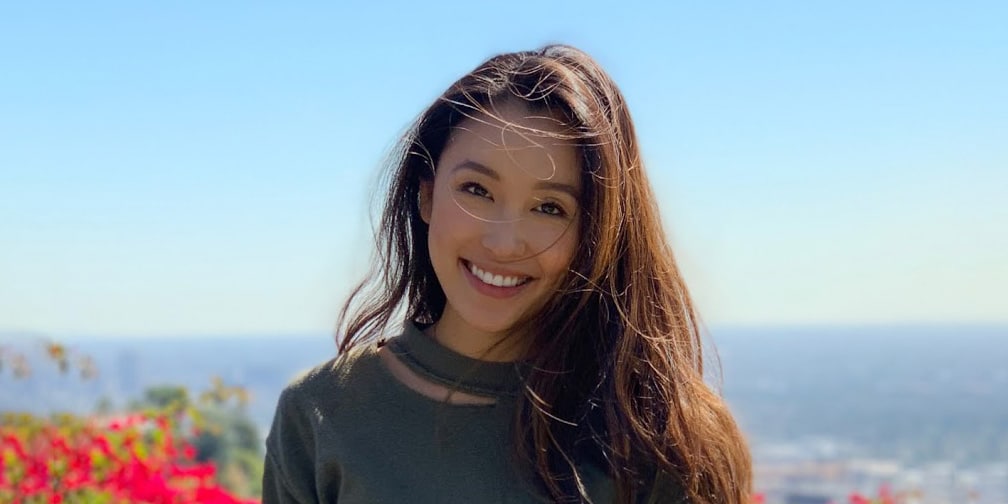 Who is Olivia Sui?

Olivia Mu Sui was born in China, under the zodiac sign of Leo on 14 August 1993; her ethnicity is Asian, but she’s now a Chinese-American writer, director, actress, and YouTuber, perhaps known best for her appearance in “Smosh“, a comedy sketch YouTube channel created by Anthony Padilla and Ian Hecox, and which had four award nominations, winning three. Olivia also has her eponymous YouTube channel, created on 19 February 2015, on which she’s amassed more than 220,000 subscribers; her videos mostly feature funny content with her guests, about cooking, and her daily routine.

When she was two years old, she moved with her parents to the US; she has been dancing ballet since she was five years old, and while she was growing up, she discovered her love for acting.

Olivia attended a local high school, and upon matriculating in 2011, she didn’t enroll at college, but took classes to improve her acting so that she could pursue her career as an actress.

Olivia made her acting debut in 2005, appearing in an episode of the series “Monk”, followed by her minor roles in the series “Weeds”, in which she portrayed Peggy, after which she was cast to play a Korean teenager in the series “CSI: Crime Scene Investigation”.

Olivia has also appeared in comedy series such as “The Big What If”, “Squad Vlogs”, “Every Blank Ever”, and “If (Blank) Were Real”.

Olivia made her debut on the big screen in 2009, in the movie “A Trivial Exclusion”, in which she was cast to play Agent Smith, followed by roles in the short movies “Just Girly Things”, “Foundher”, and “Query”.

Her most recent role was her portrayal of Raye, in the 2021 movie “Dreamcatcher”, a horror thriller written and directed by Jacob Johnston.

Since Olivia created her YouTube channel in 2015, all her videos combined have attracted more than three million views, with her most viewed video being “HBO Max GOT MY MAMA AND I INSPIRED TO COOK”, which has more than 280,000 views; her second most viewed video “Covid-19 Questions Answered With Dr. Chen” has more over 190,000 views.

Olivia was in a relationship with the photographer James Law from 2013 until 2018; the reason for their break-up is unknown, however, after she deleted the pictures featuring them together from her Instagram account, they also unfollowed each other on this social media network, and it was thus clear that this love story had ended.

In May 2018, she announced that her new boyfriend is an actor whose name is Sam Lerner; he was born under the zodiac sign of Libra on 27 September 1992, in Los Angeles, California USA; he is perhaps known best for his role as Geoff Schwartz in the series “The Goldbergs”.

Their mutual friend, Shayne Topp, introduced them to each other, and on their first anniversary on 29 April 2019, they thanked him for that, because if it weren’t for him, they would have never met. After a few months, they started living together in Los Angeles, and they are still co-habiting as of September 2021.

The two seem to enjoy in their love, according to Sam’s post on his Instagram profile, which he posted on Olivia’s birthday, claiming that he’s so lucky to have her in his life, and she replied that she loves him. However, the couple is yet to marry, and don’t have children.

Hobbies, and fun facts about Olivia

Olivia’s favorite hobby is dancing, and for a couple of years now she has been dancing for a non-profit dance company, as well as competing in dance competitions around Southern California.

She likes swimming, although she has until recently been afraid of drowning, because she didn’t know how to swim, so she took classes when she was 25 years old. She also hadn’t ridden a bike until her first TV series role, so her father taught her before shooting. That is her most precious memory with her father, because he’d worked overseas, so was often away from home.

She has a strong bond with her mother, and occasionally posts pictures of her with descriptions full of love and appreciations.

Olivia is an animal lover, with dogs, goats and pandas being her favorites; she has adopted a dog recently, and calls him Grizzy.

She enjoys cooking for her boyfriend, and also for her family and friends; on her YouTube channel, she has videos featuring her cooking.

Her favorite chef is Anthony Bourdain, and her favorite foods are pizza, hamburger and ice cream.

Olivia is into traveling, and has visited a couple of US states; her favorite travel destination is Italy.

When she wants to relax, she likes to read books, or to meditate with Reiki masters; she also enjoys listening to music.

Olivia is active on her social media accounts – on her Instagram profile she has more than 695,000 followers, and on her Twitter account more than 200,000; she mostly posts about her work and everyday life.

As of September 2021, her net worth has been estimated at over $1 million; reputedly, she has a monthly income from her YouTube channel of about $100,000.