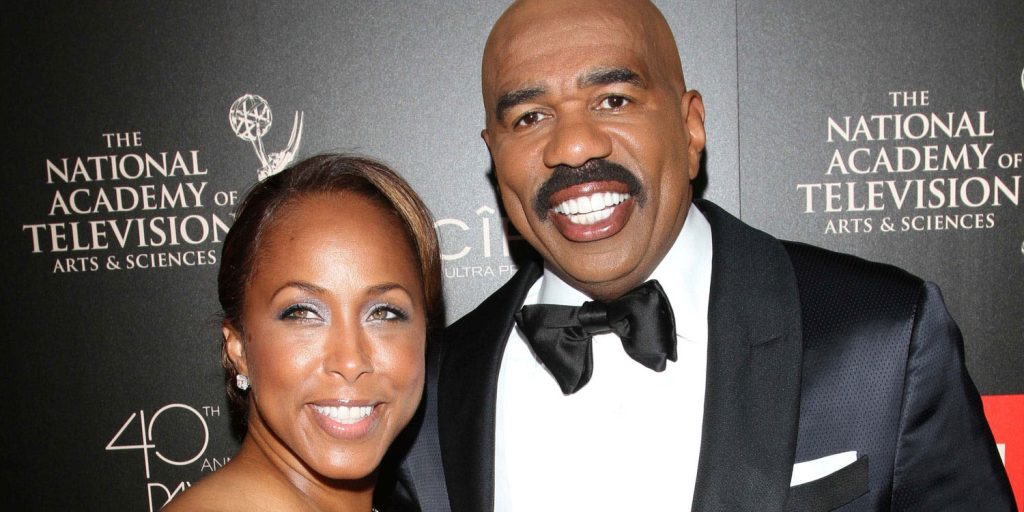 Who is Marcia Harvey? Early life and family

Marcia – maiden name unknown – was born in Cleveland, Ohio USA, on 22 January 1955 – her zodiac sign is Aquarius, and she holds American nationality. She’s an author and a businesswoman, but known to the general public as the ex-wife of the American TV host and comedian Steve Harvey.

Marcia is a very private person, thus not a lot is known about her parents and early life. It’s speculated that her family wasn’t very rich, and she had to start working early on to sustain herself. Before she met Steve Harvey, she worked at Sacks Fifth Avenue department store as a sales representative.

Marcia and Steve met in the late 1970s at a mutual friend’s reception party, and started dating shortly thereafter.

They married in a private ceremony in 1981, and had three kids, daughters Karli and Brandi, born in 1982, and son Broderick Harvey Jr. in April 1991.

When they started their relationship, Steve was still working as an insurance salesman in Ohio, parallel to which he was trying to make his breakthrough as a stand-up comedian, and eventually left his job to pursue comedy full-time. Due to his career switch, he and Marcia ended up being homeless for three years in the late 1980s. Steve eventually found a new job as a carpet cleaner, but was still adamant about becoming a comedian, which put a strain on his relationship with Marcia, who was apparently not supportive of his ambitions.

He finally made his breakthrough as a host of the variety TV show “It’s Showtime at the Apollo”, and soon landed a starring role in the ABC sitcom “Me and the Boys”. Despite Steve’s career success, not everything was so bright in his and Marcia’s marriage, and the two separated in 1994. Although Marcia and Steve have never publicly discussed the reason behind their separation, it’s been speculated that Steve’s infidelity is what ultimately caused Marcia to leave him. They finalized their divorce in 1995, with Marcia receiving custody of their three children.

Since separating from Steve, Marcia has been keeping a low profile, living her life away from the public eye. While Steve remarried to Mary Shackelford in 1996, Marcia apparently moved back to Cleveland, where she settled down with a non-celebrity Larry Greene.

As for her career, she ventured into the clothing business, opening her own department store. She also pursued her lifelong dream of becoming an author, publishing her first book entitled “Marcia: Eyes to the Soul” in 2011, which featured a series of poems she had written through the years. She has since published two more books – “Marcia: Poems From The Heart” (2011), and “Marcia: Thoughts From My Mind” (2014).

As of February 2022, her net worth has been estimated at more than $1 million.

Broderick Stephen ‘Steve’ Harvey Sr. was born in Welch, West Virginia USA on 17 January 1957 – his zodiac sign is Capricorn, and he holds American nationality. He’s a TV personality, comedian, actor and an author, perhaps known best for being the host of popular TV shows, such as “Family Feud” and “The Steve Harvey Show”.

Steve was born to Eloise Vera, a homemaker, and Jesse Harvey, a coal miner. When he was 10 years old, his family moved to Cleveland, Ohio, living on east 112th Street, which was later renamed Steve Harvey Way, acknowledging the comedian’s popularity.

In 1974, he matriculated for Glenville High School, and then went on to attend Kent State University, then West Virginia University, being a member of Omega Psi Phi fraternity.

After graduating, Steve found himself working numerous odd jobs; he was a boxer, a mail carrier and an insurance salesman among others. He started performing stand-up comedy in 1985, but found little success until he became a finalist in the Second Annual Johnnie Walker National Comedy Search in April 1990. His success in the competition opened many doors for Steve, who eventually became a host of “It’s Showtime at the Apollo”, succeeding Mark Curry.

From 1996 through 2002, he hosted his own TV show, simply entitled “The Steve Harvey Show”, which became quite popular, especially among African-American viewers. He also continued working as a stand-up comedian, performing on the Kings of Comedy tour, alongside Cedric the Entertainer, Bernie Mac and D. L. Hughley.

Since 2000, Steve has been the host of the radio program “The Steve Harvey Morning Show”, which was originally syndicated through Radio One. In 2003, he appeared alongside Beyoncé and Cuba Gooding Jr., in the musical comedy movie “The Fighting Temptations”, and also had a role in the teen comedy movie “Love Don’t Cost a Thing”.

Steve Harvey has also ventured into writing, publishing his first book entitled “Act Like a Lady, Think Like a Man” in 2009. The book was a commercial success, spending 64 weeks on The New York Times bestseller list, and was adapted into a comedy movie in 2012.

Younger audiences primarily recognize Steve as the host of the popular game-show “Family Feud”, which has been airing since 1976, but saw a significant increase in viewership after Steve took the role of host in 2010. He has also served as the host for the “Family Feud” spin-off shows “Celebrity Family Feud” and “Family Feud Africa”.

In 2012, he officially retired from stand-up comedy, performing his final act at the MGM Grand in Las Vegas, Nevada. ‘The road to this final show has been an amazing journey, doing stand-up for the past 27 years, and I can’t thank fans enough after reflecting on all those years on stage’, Steve said at the end.

In the following year, he became the first TV host in history to be nominated for two Daytime Emmy Awards for different shows in the same year, for Outstanding Game Show Host and Outstanding Talk Show Host, and was also honored with a star on the Hollywood Walk of Fame.

He has been the host of the Miss Universe six times, from 2015 through 2021; in 2015, he drew international media’s attention after he announced the wrong winner, which prompted him to offer an apology on Twitter to both contestants.

Steve and his third wife, Marjorie, are the founders of the Steve & Marjorie Harvey Foundation, a humanitarian organization which provides youth outreach services and scholarships for financially disadvantaged high school students.

Steve is also partnered with Walt Disney World Resort and the lifestyle magazine “Essence”, for the Disney Dreamers Academy, a workshop at Disney World which hosts 100 students each year.

He married his third wife, Marjorie in June 2007, who he says is responsible for changing his life and making him a better man. They have three children together, Morgan, Jason and Lori, all of whom they’ve adopted; the family currently resides in Los Angeles, California.

Steve is a devout Christian, and has attributed his success to his faith in God on several occasions. He’s also revealed that he follows a vegan diet, for both moral and health reasons.

As of February 2022, his net worth has been estimated at more than $200 million.