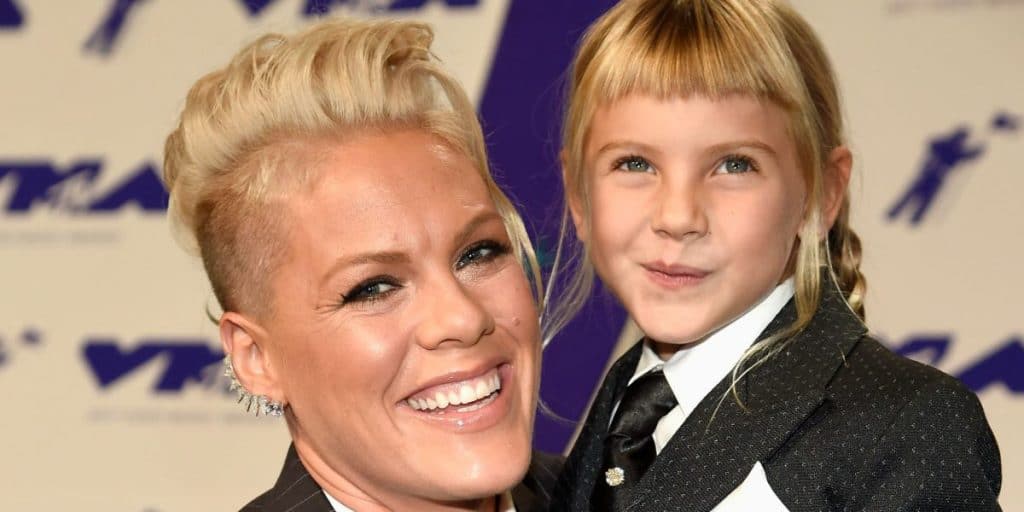 Willow Sage Hart is a young American singer, but best known for being the daughter of the pop star P!nk, and her husband, Carey Hart. All you need to know about the musician is detailed in the biography below.

Willow Sage Hart was born on 2 June 2011 under the zodiac sign of Gemini, in Los Angeles, California US. She has mixed ethnicity and holds American nationality. She has a younger brother, Jameson Moon Hart. There are currently no details regarding her education.

Willow was featured on two songs from P!nk’s sixth album “The Truth About Love ‘, namely “How Come You’re Not Here” and “Timebomb”. She inspired P!nk’s song “Run”, which was on the deluxe edition of her sixth album.

In May of 2016, Willow appeared in the music video for P!nk’s “Just Like Fire”, because she inspired the song. In 2018, Willow released a cover of the “A Million Dreams (reprise)”, for “The Greatest Showman: Reimagined” soundtrack.

During the lockdown of 2020, Willow collaborated with P!nk for the single “Cover Me in Sunshine”, written by Amy Allen and Mozella. The song debuted on TikTok, and its full version was released on 12 February 2021 via RCA Records; the song received positive reviews from fans and critics alike, with Julia Barajas of the Los Angeles Times terming Willow’s voice ‘adorable”. The song peaked at number four on Bubbling Under Hot 100 in the US, and was certified Gold by the Australian Recording Industry Association for shipping 35,000 copies.

Willow also appeared in P!nk’s music video for “All I Know So Far” released on 7 May 2021, directed by Dave Meyers, also featuring a cameo from her father, Carey.

Willow Sage Hart is too young to be in a romantic relationship, but shares a very close bond with her parents, and her brother, Jameson.

Who are P!nk and Carey Hart?

She identifies as Jewish, and also has traces of Irish and Lithuanian ancestry; however, she holds American nationality.

Although Alecia was healthy at birth, she developed asthma as a toddler. In the years following her birth, her parents started having marital problems and by the time Alecia turned 10, her parents divorced.

Alecia Moore trained as a gymnast for eight years between ages four and 12. She also trained her voice in her early years.

As per her education, Alecia attended Central Bucks High School West, where she joined her first band named Middleground. but the band split after losing a “Battle of the Bands” competition.

Alecia wrote music as an outlet for her feelings, while performing in Philadelphia clubs at 14 years old. It was around this time that she adopted the stage name ‘Pink’ (also stylized as ‘P!nk’), inspired by Mr. Pink from Quentin Tarantino’s film, “Reservoir Dogs”.

Still at 14, she joined an all-girl band, Basic Instinct, but which disbanded without releasing any music. Subsequently, she teamed up with Sharon Flanagan and Chrissy Conway to form the R&B band, Choice. Their first song, “Key to My Heart” caught the attention of L.A.Reid, who signed them to LaFace Records, with their parents co-signing as the girls were below 18.

Choice disbanded in 1998, after Reid gave Pink an ultimatum to ‘go solo or go home.’ Pink signed a new recording contract with LaFace Records and started working on her debut album, meantime her debut single, “There You Go”, released in February of 2000 peaked at number seven on the Billboard Hot 100 chart.

Pink’s debut album, “Can’t Take Me Home” was released in April 2000 and it peaked at number 26 on the Billboard 200 chart, certified double platinum by the Recording Industry Association of America (RIAA), but received a mixed response from listeners, but even so, at the 2000 Billboard Music Awards, Pink bagged the award for Best New Female Artist of the Year.

In 2001, Pink teamed up with Lil Kim, Christina Aguilera and Mya to perform a cover of “Lady Marmalade” for the soundtrack of the film “Moulin Rouge!” The song became her first number one single, won the MTV Award for Video of the Year, and her first Grammy Award for Best Pop Collaboration with Vocals.

Pink recruited former singer of 4 Non Blondes, Linda Perry, to help write songs for her sophomore album. Thus, “Missundaztood” was released in November 2001, co-produced by Perry, Scott Storch, and Dallas Austin. Its lead single, “Get the Party Started” peaked at number four on the Billboard Hot 100, and spent four weeks at the top of the Europeans Hot 100 Singles chart. Pink was subsequently named the Top Female Billboard 200 Artist of 2002.

“Trouble”, a single from Pink’s third album “Try This” (2003), earned her a Grammy Award for Best Female Rock Vocal Performance at the 46th Annual Grammy Awards.

Pink’s fourth album “I’m Not Dead” was released in 2006, and produced by Billy Mann, Josh Abraham, Max Martin, Butch Walker, Christopher Rojas and Lukasz Gottwald, it reached the top five in the UK, top ten in the US, and number one in Germany and Australia.

In 2006 and 2007, Pink collaborated with various artists: she lent her vocals on India.Arie’s “I Am Not My Hair”, Indigo Girls’ “Despite Our Differences”, and opened for Justin Timberlake on his FutureSex/LoveShow Tour.

Her fifth studio album, “Funhouse” was released by LaFace Records on 24 October 2008, after which she embarked on the Funhouse Tour starting in France on 24 February 2009, and continuing in other European countries until mid-May.

Pink has named Janis Joplin and Madonna as her greatest musical influences.

Willow’s father Carey Hart, is an American former professional freestyle motocross competitor, born on 17 July 1975 in Las Vegas, Nevada, USA. His parents divorced when he was young, so he and his brother Anthony Hart grew up with their father Tom, who owned a construction company.

He met Pink at the 2001 X Games and they started dating shortly – Pink actually proposed to Carey in June of 2005 during one of his races in Mammoth Lakes, California, and on 7 January 2006, they married at the Four Seasons resort in Costa Rica. The couple welcomed their first child Willow in 2011, and their son Jameson, in December 2016.

In late 2021, Willow Sage Hart has yet to establish an independent net worth, while her mother P!nk is reputedly worth over $200 million. P!nk and Carey Hart own a 200-acre ranch and winery in the Santa Ynez Valley, Santa Barbara County California, which they purchased for $12 million in 2013.