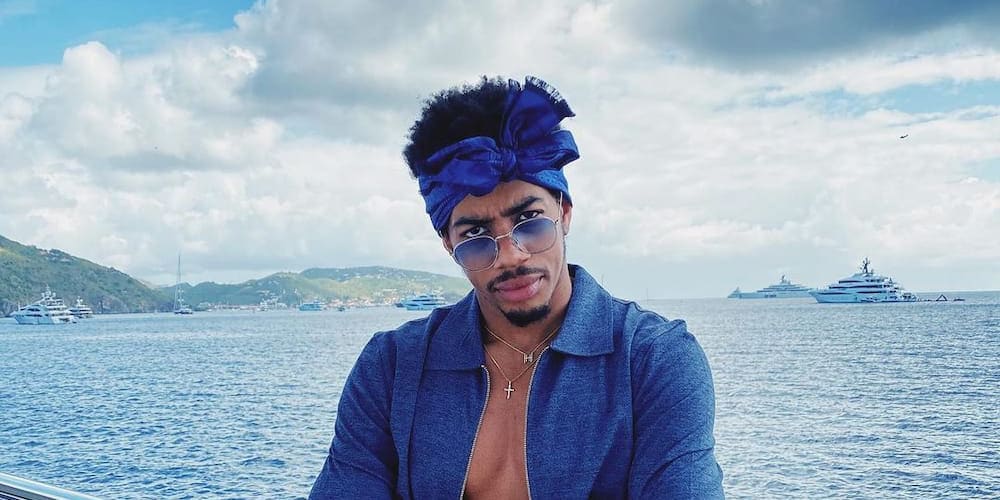 Wynton Brycelon Ali Harvey was born in Atlanta, Georgia USA, on 18 July 1997 – his zodiac sign is Cancer, and he holds American nationality. He’s a photographer, but perhaps known best for being the son of the comedian and TV personality, Steve Harvey.

Wynton is the son of Steve Harvey and his second wife, make-up artist and fashionista Mary Shackelford; the two married in a private ceremony in 1996. Wynton is the only child they have had together, however, he has six half-siblings from his father’s other marriages. Interestingly, he is Steve’s youngest biological child, as three children from his current marriage with Marjorie Harvey are all adopted.

Wynton’s parents divorced when he was eight years old; their separation was quite public, and attracted more press coverage than any other celebrity divorce at the time. Mary claimed that Steve was verbally and physically abusive to her and Wynton, and also accused him of infidelity. She even pressed charges against the comedian, but they were dropped for lack of evidence. Following the divorce, Wynton stayed with his father, who had full custody of him.

Wynton was very creative as a child, and at an early age knew that he was going to be a photographer. When he was 11 he started taking photos using his dad’s camera, and then editing them through graphic editor software.

After matriculating from a local high school, he enrolled at Savannah College of Art and Design in Atlanta, Georgia, where he majored in photography and fashion design. He graduated in 2020, with a Bachelor of Arts degree.

Career as a photographer

Wynton launched his professional photography career in 2016, when he opened his own photo studio in Atlanta. In the same year, he produced his first showcase, which increased his popularity as a photographer, and attracted new customers to his studio. Today, his works can be seen on his website, as well as on his Instagram page. Wynton is known particularly for his portraits and landscapes, as well as for his conceptual photos of everyday items.

In his latest black and white photo series, which can be seen on his Instagram account ‘@bywhyntonharvey’, he captured scenes from last years’ Black Lives Matter and Free Palestine protests.

Wynton also has an interest in fashion, and has modeled for several other photographers.

Wynton is currently in a relationship with the model and social media star, Taylor Gordon, perhaps known best for being the daughter of the famous journalist Ed Gordon. They started dating back in 2016, and Wynton made their relationship public in an Instagram post from 2017, in which he celebrated their first anniversary. Since then, the two have been sharing a lot of photos featuring each other on social media, expressing their mutual love.

He is an avid supporter of the Black Lives Matter movement, and has donated money to the organization on multiple occasions, while he also actively participates in their protests. Last year, he walked in a peaceful protest against police brutality, which started after George Floyd was unlawfully killed by a police officer in Minneapolis, Minnesota.

Wynton is very close to his father, and they’ve been spotted vacationing together on several occasions. When “The Steve Harvey Show” came to an end in 2019, he took to social media to share a touching message of support to his father.

He is a fan of art-house cinema, with some of his all-time favorite movies being “Seven Samurai”, “Gummo” and “Fanny & Alexander”.

Who is Wynton’s father Steve Harvey?

Steve Harvey was born in Welch, West Virginia USA, on 17 January 1957 – his zodiac sign is Capricorn, and he holds American nationality. He’s a TV and radio presenter, author, actor and a former stand-up comedian, perhaps known best for hosting popular TV shows such as “Family Feud”, and “The Steve Harvey Morning Show”.

Steve graduated from Kent State University in 1979, where he was a member of the Omega Psi Phi fraternity. Before he became famous, he had been working as an insurance salesman, a carpet cleaner, and a mailman, among other odd jobs.

He started performing as a stand-up comedian in 1985, at the Hilarities Comedy Club in Cleveland, Ohio. In 1990, Steve was a finalist at the Second Annual Johnnie Walker National Comedy Sketch Search competition, which led to him being noticed by Fox network executives, who hired him to be the host of their variety TV series “It’s Showtime at the Apollo”.

In 1994, he began starring in the ABC sitcom “Me and the Boys”, and later in the WB network show “The Steve Harvey Show”. In 1997 and 1998, he performed in the Kings of Comedy tour, alongside Bernie Mac, Cedric the Entertainer and D. L. Hughley, which became the highest-grossing stand-up tour of all time, earning more than $37 million, and was eventually followed by an eponymous comedy movie.

Steve did his last stand-up performance in 2012, as he became more focused on his work as a TV presenter.

Since 2010, he has been hosting the game show “Family Feud”, along with its spin-off show “Celebrity Family Feud”. Some other TV shows he’s hosted include “Steve Harvey’s Funderdome”, “Little Big Shots” and “Little Big Shots Forever Young”. For his work as a TV host, Steve has been rewarded with six Daytime Emmy awards, two Marconi Awards and 14 National Association for the Advancement of Colored People (NAACP) Image Awards in various categories.

In 2017, he founded his own entertainment company called Steve Harvey Global, which houses his production company East 112 and various other ventures, through which Steve produced an African version of “Family Feud”, and was involved in taking over HDNet, in partnership with Anthem Sports and Entertainment.

He and his wife Marjorie are the founders of The Steve and Marjorie Harvey Foundation, which focuses on youth education.