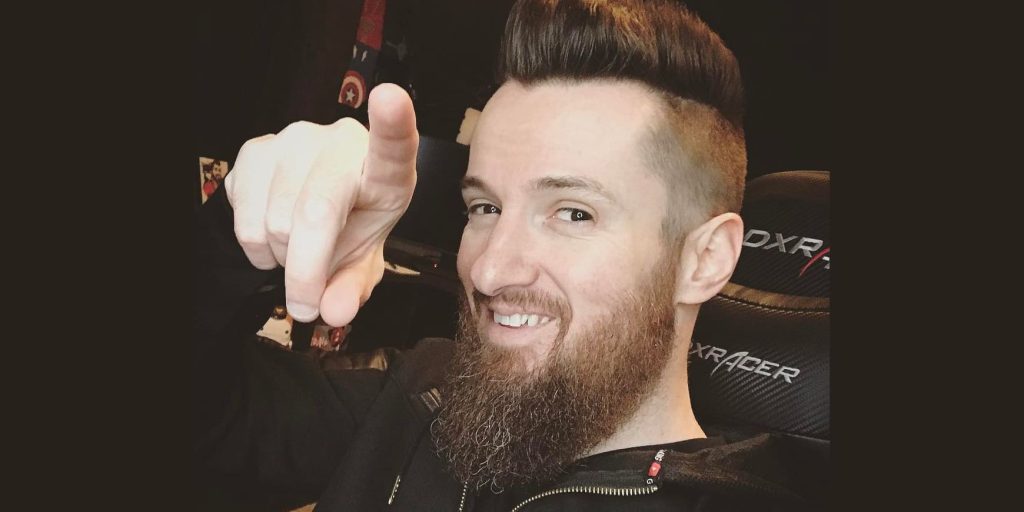 Luke Patterson – aka CaRtOoNz – was born in Green, North Carolina USA, on 21 September 1982 – his zodiac sign is Virgo, and he holds American nationality. He’s a gaming YouTuber and a social media star, known for collaborating with members of the Vanoss Crew, particularly H2ODelirious and Maskedgamer.

Luke’s parents are Frank and Gail Herring Patterson, and has a younger sister named Christina. He’s revealed that he started playing video games in his childhood, when he was only five years old, on his old Nintendo Entertainment System console. Some of the first titles which sparked his passion for gaming were “Super Mario Bros.”, “The Legend of Zelda” and “Final Fantasy”.

He matriculated from a local high school in 2000, and then moved to Washington D. C., but has since returned to his home state. Luke studied at Rockingham Community College in Wenworth, North Carolina, graduating in 2005. He has since worked for TIMCO Aviation Services, as an Aircraft Structural Engineer, before quitting his job in 2016 to focus on his YouTube career.

Luke launched his YouTube channel on 10 September 2006, but didn’t upload a video until January 2014. Initially he mainly posted videos about the card game “Yu-Gi-Oh”, but didn’t attract a wide audience until he started uploading gameplays of “WWE 2K14”, featuring H2O Delirious.

The two have since collaborated on numerous videos on Luke’s channel, including gameplays of “Grand Theft Auto V” and “UFC”, along with more casual Q&A videos.

The first video of Luke’s to go viral was “Agar.io – “That #1 Spot!” (w/H2O Delirious)”, in July 2015, which surpassed a million views in only a few weeks. Luke’s channel then saw a surge of new subscribers, and he started considering YouTube as his full-time career.

Aside from gaming videos, Luke has also been posting videos from gaming related events, such as E3 and PAX conventions, and unboxing videos, in collaboration with brands, such as Lootcrate, Nerd Block and Recurring Hero Box.

More recently, Luke has mainly been posting his gameplays of the popular online multiplayer game “Among Us”, usually featuring other YouTubers, particularly members of the Vanoss Crew.

As of December 2021, his channel numbers more than 3.7 million subscribers, and over a billion views; Luke’s most popular video is “UNO: The Movie”, which has been viewed more than 3.6 million times since it was uploaded in August 2016.

He is also active on Instagram, with his account numbering more than 850,000 followers. He mainly uses his presence on Instagram to promote his YouTube content, while he also occasionally posts about his daily life and hobbies, such as collecting cars models and comic books.

Much like many other gaming YouTubers, Luke also has a Twitch account, which numbers almost 100,000 followers, however, he hasn’t been active on it in more than six years, and it appears that he has no intention of doing livestreams in the foreseeable future.

Does CaRtOoNz have a girlfriend?

Luke is a very private person who prefers not to reveal details about his love life on social media, thus not a lot is known about his relationships.

He apparently dated H2O Delirious’ sister for almost eight years, but although their relationship didn’t work out in the end, Luke stayed good friends with H2O.

He is currently in a relationship with the entrepreneur Genay Peavey. The two were first seen together at a football game in September 2017, which sparked rumors about them dating, which Luke and Genay soon confirmed. They have since started living together, and Genay is now working as Luke’s brand manager.

Luke hasn’t been married or engaged, and doesn’t have children.

One of the fellow YouTubers Luke has most frequently collaborated with is Jonathan Gorman Dennis, aka H2O Delirious. The two made their first collaborative video in January 2014, and have working together frequently ever since.

Jonathan never shows his face in his videos, and even though he often collaborates with other YouTubers and members of the Vanoss Crew, Luke is his only colleague who’s met him in person and knows what he looks like.

One of Luke’s hobbies is collecting vintage car models; he currently owns a ’89 Nissan Skyline GT-R R32, ‘91 Acura NSX, and ‘93 Toyota Supra, among others.

Luke often trains at a shooting range, and takes pride in his skill, and his collection of guns.

He is a big fan of action movies, with some of his favorites being “Die Hard”, “John Wick” and “Venom”, while his favorite actors are Tom Hardy and Bruce Willis.

Luke is close friends with the mixed martial artist Max Holloway, and has even featured him in some of his videos.

Luke is fairly active on YouTube, and his videos accumulate more than two million new views each week. It’s estimated that YouTubers are paid up to $4 per 1,000 views, which means that Luke earns up to $32,000 per month, or around $400,000 each year.

He earns additional income though the sponsored content he does for various brands, such as Ubisoft, Block N Load and EA, which YouTubers usually charge at $10 to $50 per 1,000 views. Furthermore, Luke also runs a website ‘cartoonz.com’, through which he sells his merchandise which includes items such as hoodies, T-shirts and plush toys.