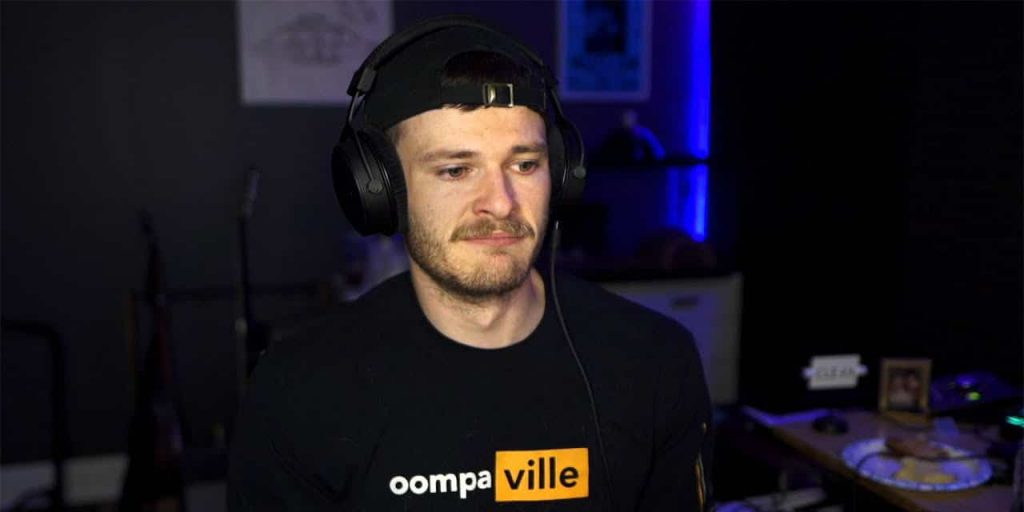 Oompaville is an American YouTuber and Twitch streamer, who’s achieved stardom by uploading funny videos, which are mostly reaction videos to other YouTubers and their videos, but he also uploads prank, challenge and Omegle session videos.

Born Caleb Hunter Phelps on 29 August 1996 under the Virgo zodiac sign, in Virginia USA, since obtaining world fame, Oompaville has chosen not to share any details about his family, including the names of his parents and whether he has any siblings or not.

Posted by oompaville on Wednesday, September 8, 2021

He attended a local high school from which he matriculated in 2014; during his years there, he was rather active, playing soccer and basketball with his friends, but also loved skate-boarding, and was often on a bicycle ride. However, his love for video games prevailed, and he started following various YouTubers who were uploading gameplay videos. This sparked interest in a career as a YouTuber, and in 2010 launched his YouTube channel.

He didn’t upload any content on his channel until 2014 – at first, Oompaville uploaded gameplay videos of various games, and began gaining subscribers, but he wasn’t quite satisfied with the direction his career and YouTube channel were heading to, and in 2019 he deleted all of his previous content, and began uploading new videos. The first – “Reacting to True Teen Stalker Animations” – now has over 1.4 million views, and is one of his popular.

He continued uploading similar videos, such as “This is how you get Banned on Omegle”, and “Going on Internet today was a mistake”, among others.

Oompaville continued uploading videos and attracting new fans, and passed the one million subscribers mark in July 2019, which encouraged him even more to focus on his YouTube career. The new videos started garnering more traffic – the number of his subscribers has almost tripled, and is now close to three million subscribers, with his videos having been viewed more than 275 million times.

Some of the most popular include “True Story Animations Disney Probably Wouldn’t Approve of” viewed 11 million times, then “I Got My Step-Mom Pregnant a true Story Animation That Will Raise a Lot of Questions”, just under 4.5 million views, and “Parents Check Kid’s Search History”, which has been watched around 3.5 million times, among several other videos that have steadily increased his popularity and wealth.

Over the years, Oompaville has befriended other YouTubers, including Riftyish with whom he has launched the company Sour Boys, specializing in producing and selling scented candles. He serves as the CEO of the company, which for now has two flavors, Rainbow Sour Boys and Strawberry Sour Boys.

They have launched a company website, through which they distribute the products. Furthermore, they also sell SourBoys stickers, which are a part of the candles.
Oompaville also sells his own merchandise, which includes shirts and hoodies with his logo.

Although he is in front of the camera for the better part of the day, and always talking, he hasn’t shared much about his personal life, choosing to keep most of the interesting information private.

However, he has uploaded a couple of videos with his girlfriend in the past, and revealed that her name is Shyane, but since 2020, there haven’t been any new videos or information about their romance. He hasn’t talked about her, and sources state that Oompaville is currently single and focused entirely on his career.

As of mid- 2021, Oompaville’s net worth has been estimated to be around $2.3 million, earned through his successful career as an online content creator, and also as an entrepreneur.

This popular YouTuber has brown eyes and dark brown hair, but is recognized for his beard and mustache as well. Oompaville stands at a height of 5ft 8ins (1.73m), while he weighs approximately 150lbs (68kgs). His vital statistics are unknown, though he has an average figure.

In addition to making funny videos, this prominent comedian has several other interests. He’s a huge music fan and isn’t just listening to music, but also creating. He is a singer and guitar player, which has encouraged him to compose his own songs.

His favorite music genre is rock, but for now he hasn’t pursued music professionally as a solo artist, but has expressed his talents with the soundtrack for the short music video “Hardy: Give Heaven Some Hell”

He is still active outdoors, riding a bicycle on mountain roads, but he also tends to visits the gym several days a week, which helps him maintain his perfect form.