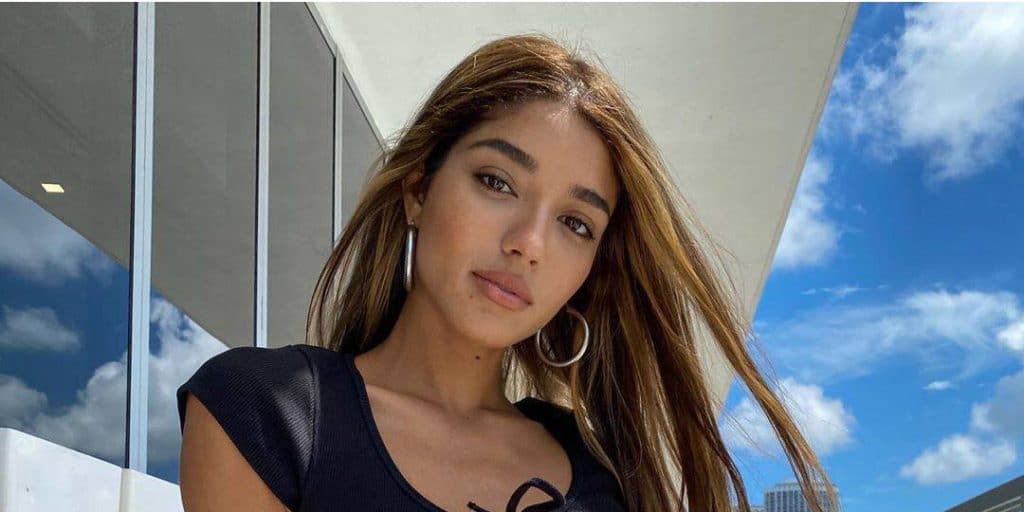 Yovanna ‘Yo’ Ventura was born in Miami, Florida USA, on 24 November 1995 – her zodiac sign is Sagittarius, she is of Hispanic ethnicity, and holds American nationality. She’s a model, actress and a social media star, followed by more than 10 million people across all of her social media, perhaps known best for being the rumored ex-girlfriend of the pop singer Justin Bieber.

Yovanna was born into a family of Dominican immigrants. Her parents divorced not long after her birth, and she was raised by her mother and step-father, Humberto. Her father is a doctor, and moved back to Dominican Republic following the divorce, but has stayed in contact with Yovanna, and according to her the two are still very close.

She matriculated from the Miami Senior High School in 2013, but hasn’t further continued her education, as she wanted to focus on her modeling career instead.

Rise to fame and modeling career

Yovanna was launched into fame in 2014, when she was spotted spending time with the pop star Justin Bieber. The vast media attention helped her kick start her modeling career, and she soon signed with a modeling agency.

In 2017, Yovanna was featured on the Times Square billboard for the Yeezy Season Six fashion campaign. Since then, she has modeled for the MCM x Puma, JD Sports, alongside Nicki Minaj in the “Ha(u)te Couture” global campaign, and has also walked the catwalk for swimwear brands such as Beach Bunny, Frankie’s Bikinis and Kaimin.

Also in 2017, Yovanna appeared in the music video for “Bella y Sensual” by Romeo Santos, which now numbers more than 500 million YouTube views. In the following year, she started working with the online fashion retailer Revolve, and has since made her own capsule collection in collaboration with the brand.

In 2019, Yovanna produced her swimwear collection with the Miami-based brand ISHINE365, which was launched with a catwalk presentation at the Miami Swim Week. In June the following year, we saw her star in another viral music video, for Maluma’s song “Hawái”.

During her career, she’s posed for several renowned fashion and lifestyle magazines, including “Vogue Italia”, “Harper’s Bazaar” and “Maxim”.

Yovanna made her acting debut in 2017, when she appeared in an episode of BET’s biographical mini-series “The New Edition Story”, which chronicles the career and disbandment of the music group New Edition. The series starred Bryshere Y. Gray, Elijah Kelley and Luke James.

In 2021, Yovanna made an appearance in an episode of the anthology drama series “Tales”, entitled “Act Up”. In the same year, she has also been featured in the documentary series about the popular reggaeton singer Natti Natasha, entitled “Everybody Loves Natti”.

It’s no secret that Yovanna was briefly in a relationship with Justin Bieber. The two were seen together for the first time in May 2014, on the Venice Beach boardwalk in Los Angeles, California.

According to sources, they seemed ‘very chill and happy’, and were reportedly quite touchy with each other.

While it’s not clear how the two met, it’s rumored that Justin noticed Yovanna on Twitter, and to meet her in person. They continued to post couple photos onto their social media accounts through summer 2014, but broke up seemingly abruptly in September the same year. Not long afterwards, Justin started dating his ex-girlfriend Selena Gomez again, and many of their fans interpreted his public outings with Yovanna as a means of making Selena jealous.

After her break-up from Bieber, Yovanna was followed by rumors of her dating the R&B singer The Weeknd. They were apparently spotted spending time together on several occasions, but neither of them publicly confirmed their relationship status.

In October 2018, she started dating the rapper Swae Lee, with whom she was in an on-and-off relationship for a few months, before breaking-up in April 2019.

Yovanna currently appears to be single, hasn’t been married or engaged and doesn’t have children.

As her modeling career took off, Yovanna’s popularity on social media skyrocketed too. She posts her stunning professional modeling photos on Instagram, along with more casual ones from her everyday life. As of November 2021, her account ‘@yoventura’ numbers more than 5.2 million followers.

Yovanna also launched her Twitter account in July 2014, and has since amassed more than 35,000 followers, however, she hasn’t been active since June 2017, and it appears that she’s now fully shifted her focus to Instagram and TikTok.

Yovanna is passionate about animal rights, and has been involved with several non-profit organizations dedicated to the cause. She’s an ambassador for Global Wildlife Foundation, and supports charities such as P. A. W., La Ventana De Los Cello, Urgent Dogs of Miami, and more.

She recently donated money to, and promoted the ‘#savetheokavango’ campaign, which aims to help the people of Namibia and Botswana fight the oil exploitation in the region surrounding the Okavango river.

Yovanna has a pet Rottweiler dog called Tatum, and even manages a separate Instagram account, completely dedicated to him.

She practices yoga and meditation every morning, which helps her maintain both her mental and physical health.

Yovanna is fluent in both English and Spanish.

She is a big fan of romantic movies, with some of her favorites being “The Notebook”, “Silver Linings Playbook” and “Eternal Sunshine of the Spotless Mind”.

As of November 2021, her net worth is estimated at more than $3 million.

Who is Yovanna’s ex-boyfriend Justin Bieber?

Justin Bieber was born in London, Canada on 1 March 1994 – his zodiac sign is Pisces, and he holds Canadian nationality. He’s a singer and a songwriter, known for his hit songs which include “Baby”, “Sorry” and “Love Yourself”.

Justin was born to Jeremy Jack Bieber and Pattie Mallette, as their first child. They were never married, and Justin was brought up by his mother and his step father, Bruce, whom his mother married two years later.

Justin has been showing a musical talent since an early age, and his mother actively encouraged him to purse it. When he was still a child, his mother entered him in a talent competition, where he took the second place.

At the age of 14, he started uploading videos of himelf singing onto YouTube, which soon gained a lot of attention, and helped young Justin to get noticed by record labels. In 2010, his song “Baby”, in collaboration with the rapper Ludacris went viral, and was even briefly the most viewed video on YouTube. Although the song was somewhat controversial at the time, with many critics questioning its musical quality, it undoubtedly helped Bieber further advance his singing career and launched him into stardom.

He has since gone on to become the first solo artist to have four of his singles reach the top of the Billboard 200 chart before the release of a debut album. With his 2012 studio album “Believe”, Justin experimented with a more mature dance-pop sound, which he maintained in his future work. Following the album’s release, the young singer was involved in several legal issues and public controversies, which drastically damaged his public image.

Justin has since released three more studio albums – “Purpose” (2015), “Changes” (2020) and “Justice” (2021) – all of which have topped the charts both in US and worldwide. He is one of the best-selling musical artists of all time, and a two times Grammy Award winner.

Justin was famously in an on-again off-again relationship with the pop singer Selena Gomez from 2010 to 2018, and has admitted that a lot of his songs, such as “Sorry”, “What Do You Mean?” and “Mark My Words”, are about her. In July 2018, he proposed to his then girlfriend, model Hailey Baldwin, whom he had briefly dated in 2016. They tied the knot in a private ceremony in Bluffton, South Caroline on 30 September 2019.